According to Cajun historians, Cajuns developed customs to bring themselves together  in order to survive after “The Great Upheaval.  Cajun society consisted of closely knits family members and certain neighbors who depended on each other socially and economically. This cooperation is one of the factors that has helped Cajuns to maintain the old country culture. Cajun family relations were important to all family members. Not only Cajun fathers and mothers,  but grandfather and grandmothers, aunts and uncles, God parents all help in raising children. Godfathering and godmothering were and for that fact are still very important in Cajun  family life. Youth usually refer to their godparents as parrain and marraine, and consider them family even if they may  not be blood related.

Another way this  ‘Closely Knit’ culture manifest itself, is to live within eyesight of each other. At Bayou Pigeon it was quite common for the grown children / siblings  to all live within “eyesight” of the patriarch and matriarch.

This custom led to the development small groups or clusters of families in the physical landscape. This may  not have been evident to the casual observer, but it was clearly evident to anyone who has spent some  amount time at Old Bayou Pigeon.  It is still somewhat evident at  Bayou Pigeon, today.

Let's take a look at some Bayou Pigeon history.

The Michel families, a founding family of Bayou Pigeon,  lived around the confluence of Little Bayou Pigeon on the west side of Grand river. The Berthelot’s lived on the east side of the Grand  River at the confluence, ie.,  the property of Anatole Berthelot. The Vaughn's’ lived  to the west  of the Michel's’ on both sides of Little Bayou Pigeon. One group of Landry’s lived south of the Michel's, Then another group of  Berthelot’s & Templet’s,  The Blanchard's, Solars and Daigle's lived around Indigo Bayou, and so on.

In God We Trust all others show corroborating data ! A careful  review / study  of  1920 U.S. Census data, and  family genealogy data in the book demonstrates  how this phenom came to past at Bayou Pigeon.

Check out the following sketch of Michel's and Berthelot's we put together  to validate this claim. 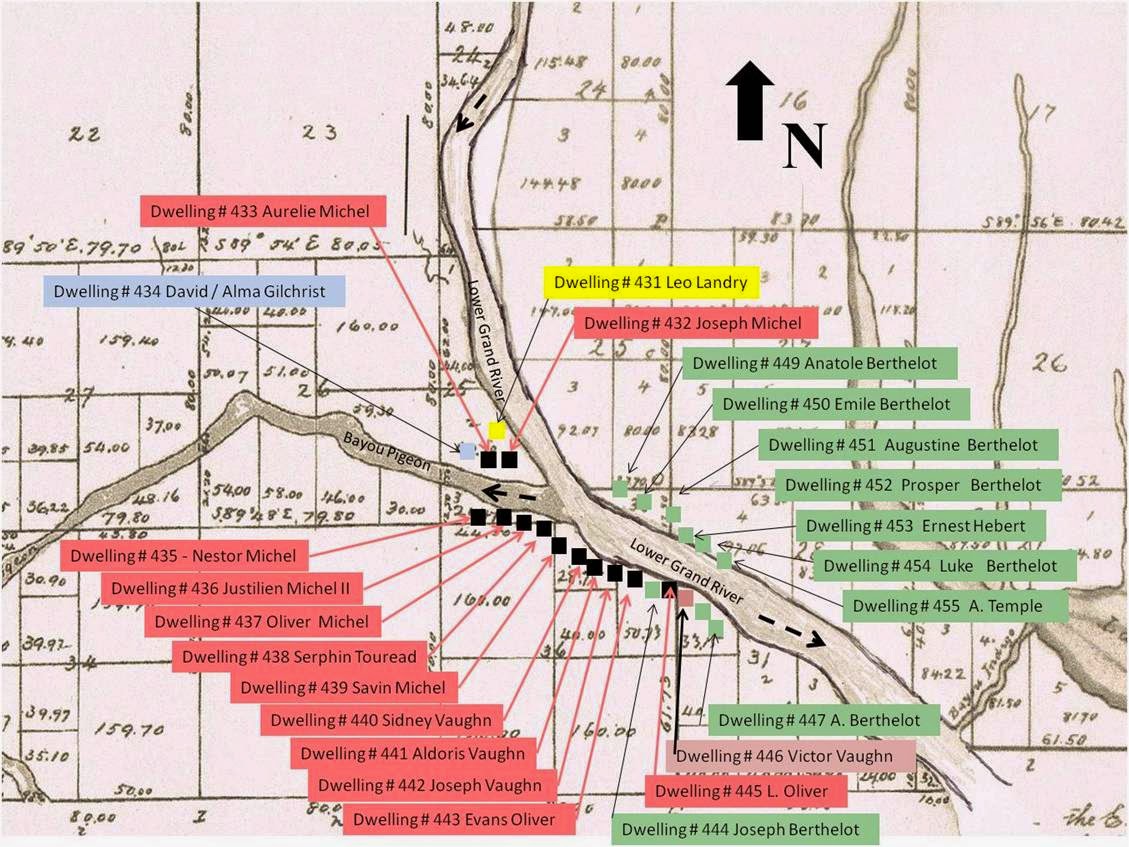 We did  not have the time  nor   the space to put this type documentation together in the book, But here it is in our blog  for all to understand.  Please share with those have an interest ... Preserve the Heritage... Any additional info do not hesitate to comment.
Posted by Chachie of the Atchafalaya at 9:30 AM No comments: 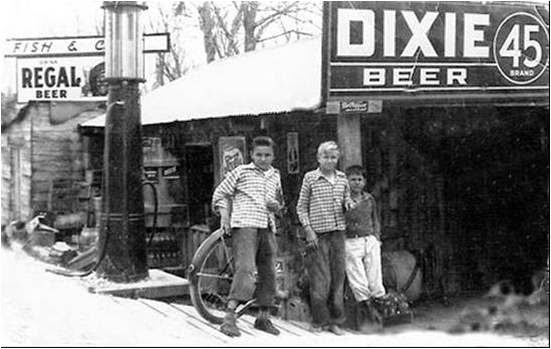 The Cleveland (Bee) Landry grocery store and fish buying dock from the road side.

This is another great photo of the Bayou Pigeon Folk life between the Road and the Borrow Canal.  C1945, Johnson Hedges, Eves Hebert and unidentified.  Note the Gas pump, fish buying building / dock, beer signs of the era, soda pop cases and bottles. 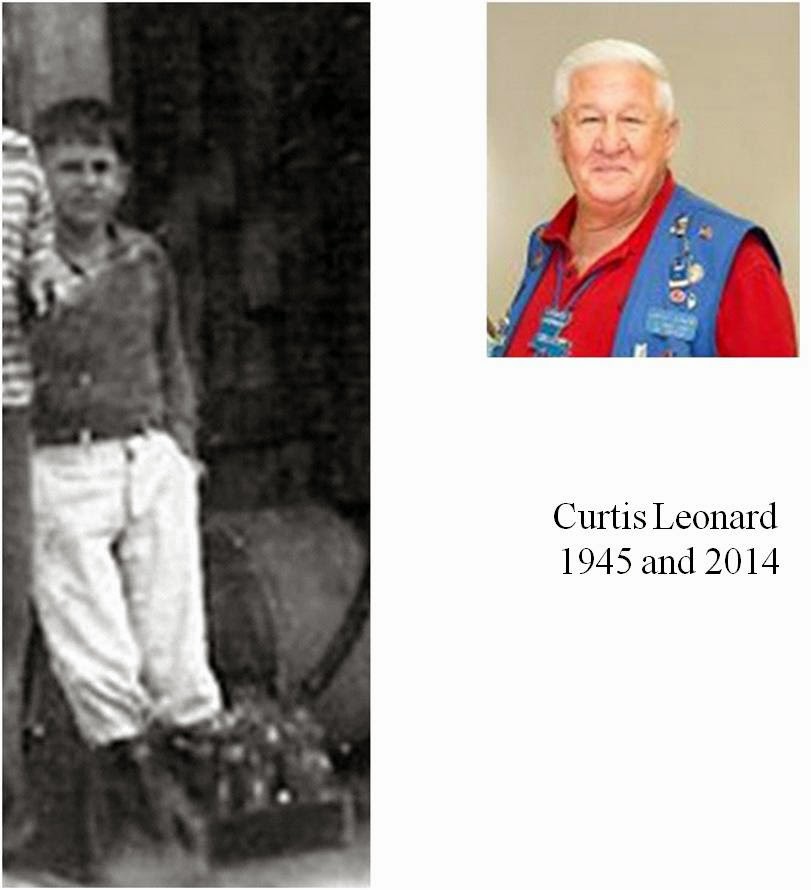 Curtis, considers himself part of two of Bayou Pigeon’s most well known families.  The Leonard’s and the Gaudets.  Let us explain.

Mr. Alcee Leonard came  to Bayou Pigeon in the 1930’s. He had five sons; Sidney, Webster, Norman ,Louis, and Wilson, all lived at Bayou Pigeon. Sidney Leonard married Verna Settoon of Bayou pigeon and they lived on a houseboat in the borrow canal (i.e., houseboat alley), right next to the Bee Landry Store and Fish dock.

Their son Curtis Leonard was born in 1939 at Bayou Pigeon, LA.

Sidney Leonard was killed on a tug boat in route to a Williams / Mc Williams Dredge somewhere in the Atchafalaya in 1941.  Sidney and the four other crew members died of Asphyxiation from carbon monoxide fumes after there some mechanical problems on a cold night. His death left a young Verna and Curtis on their own living in their little houseboat.

Curtis remembers his early childhood at Bayou Pigeon very well.  His friends were Johnson Hedges and Eves Hebert in the picture. They all liked to hang around Mr. Bee’s store.

After all, Verna and Curtis lived right next to the store / fish dock. (The picture on page 230 was taken around that time, in approximately 1945. Curtis remembers starting school at Bayou Pigeon and that his mother actually made room for a Mrs. Harper, (a Bayou Pigeon School teacher) and her husband, to live with them in their houseboat for a time, when no place was available to rent.

Curtis remembers “Bully Eads”, (Page 224) the African American traveling vendor from Plaquemine to Bayou Pigeon very well.  He remembers that he and his mother would catch a ride with Bully, for $1, to Plaquemine.  Where he his mother would shop at Dalbors home furnishings and then spend the night at the Lamar hotel and then travel back with Bully to Bayou Pigeon the next morning.

His mother Verna eventually remarried Johnson Gaudet; a resident of Bayou Pigeon and for a time Verna and Johnson continued to live in the houseboat next to the Grocery store.

The store had been sold to Wallace Gaudet, Johnson Gaudet’s father. Verna was frequent visitor to the store.  Johnson and Verna continued to live at Bayou Pigeon until Curtis completed the fourth grade at the Bayou Pigeon School.

Curtis remembers his Bayou Pigeon grandfathers, Mr. Alcide Leonard and his step grandfather Wallace Gaudet, very well. He considers the Gaudet family his family just as much the Leonard family.

Since Wallace Gaudet is my wife's grandfather, I asked him what kind of person was Wallace?  As he died before I met Diane. He said Wallace was a stern but a kindhearted man, to the extent that some folks took advantage of the credit he extended to the folks who could not pay for their groceries. Curtis remembers that Wallace would let him pump gas from the gravity gas pump (see the picture again) to customer’s cars and trucks.  No electricity in those early days.

Curtis remembers Grandfather Wallace would never charge him for a soda, when his step father and mother would let him have one.

Curtis is currently married to Tana, and he has 7 children.  He is active in the Morgan City AARP organization.

Curtis Leonard, considers himself a Bayou Pigeon native and now; no longer unidentified.

If you can identify someone in the who is unidentified, do not hesitate to contact us.

Posted by Chachie of the Atchafalaya at 8:00 PM No comments: