Louisiana Master Naturalist of the Year 2022

And The Award Goes To …

56 Years Of Service And Still Counting

1.  Individuals must live in Louisiana and contribute to our understanding of Louisiana’s natural history.

2.  Award recognizes a lifetime achievement in the field of natural history.

3.  Individual must have made a significant contribution to the understanding of Louisiana’s natural history

4.  Individual has track record of sharing his/her contribution with the lay public, scientific community, or both. 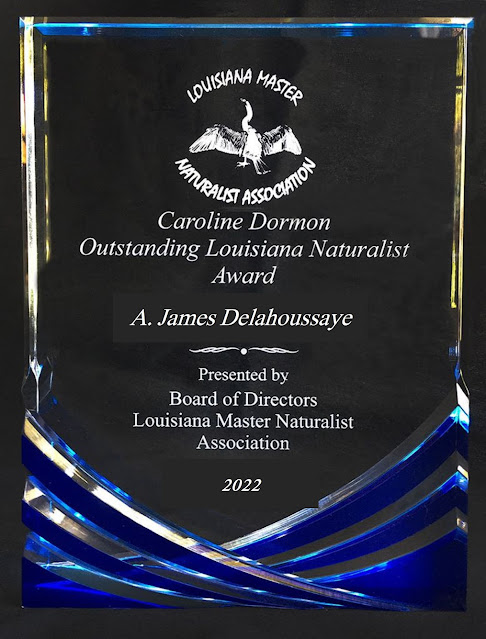 It is generally accepted  that a  Naturalist is an expert in Natural history, especially zoology/botany.
There are many distinct types of  ‘’ology’s / ologists,’ typically identified by the type of organisms they study or their area of specialization such as: Archaeology / Archaeologist, Anthropology / Anthropologist, Zooarchaeology / Zooarchaeologist, Paleologist, Herpetologist, Ornithologist, Ichthyologist,  Wildlife Biologist etc.
Regarding  Zooarchaeology and archaeozoology both  are the study of animal remains at archeological sites. Archaeozoology is the study of relationships between humans and animals over time.
Jim’s knowledge covers  all the areas mentioned above.
The best ‘ologists’ of any type are those  who not only book knowledge but have lived  the experience firsthand.  Naturalists develop real world common sense. 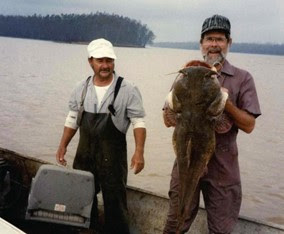 Thus,  the best naturalist  would be one whose knowledge of nature is more than just academic education. Jim has the advanced formal education, and he has also experienced  these areas of study as a young man living in the wild Atchafalaya Basin.
Being a naturalist  involves photography, teaching, and writing.
Along with those skills mentioned  above, Jim’s experiences as a commercial fisherman in the Atchafalaya Swamp Basin, has helped him develop a marvelous eye for the landscape, and a deep insight into the nature and culture of the Atchafalaya Basin
He has worked as an adjunct researcher in the department of Sociology, Anthropology at the University of Louisiana at Lafayette, where he analyzes animal bones from prehistoric Native American middens.
He has given numerous presentations at libraries and museums up and  down the  boundaries of the Atchafalaya National  Heritage Area, preserving and  documenting the culture and folklife of the Atchafalaya Basin.
Naturalist  to be good,  need to publish … Things that are true, original and their target audience will find interesting.
To prove that we use analogy of  the proverbial saying  (c1942) …'You are what you eat' is the notion that to be fit and healthy you need to eat good food.
Apply that logic to a Naturalist … you are what you publish !

Published  stories on The Delahoussaye Riverlogue

His Riverlogue blog contains over 220 topics and serves as a window into the natural history of the Atchafalaya Basin: the people, the seasons, the water, the mammals, birds, fish, amphibians, reptiles, and life in general.
Some examples of Jim’s writings are:
The Levee, Basin Education, Basin  Houseboats, Basin  Bedding, Nighttime, Beginning  Life, Myette Point Boats  and Motors, Basin Steamboats, Basin  Law and Order, Basin Medicine, Basin Religion, Timber Work, Earning  and Prices, Fishboat Commerce, Lines, Hooks, Cotton  and Nylon, Cut Bait, Crawfish as Bait, Live Bait, Line  Fishing Bait, The Trot Line, Snag  Lines, Tight Lines’, Crosslines, Bush Lines, Bent Lines, Adjusting Bridles, Blue Cats or Channel Cats, Commerce – Moss and The Rest, Boat riding Birds, Cool Water, Crabs in Fresh Water, The Dead Tree, Snakes  and  Snakebirds, Birds  and Beavers, Frog  Survey, Winter  Solstice, White  Eels, The River Lives, Crabs  and Gator Remains, The Cow Killer, Dead Moccasins Bite, The Shrimp Are Back, Tar  and Traps, Skimmer Magic, Contrails  and Ibis, Frog  Night, Thrushes in Feliciana’s, Pregnant  Shrimp, Gars, Kites and Mayflies, Blue Birds  and Clean  Water, Hummer Banding, Eagles  and Egrets, Cormorants, Eagles  and  Alligators, Bees  and Birds, River Shrimp, Peregrine, Mosquitos, Shrimp Study, Fox  Sparrow, Wood duck Thoughts, The  Sharks  Are Back.
Blue Cats or Channel Cats ?
I did run the line on Sunday after baiting it with shrimp on Saturday. It did pretty well – 12 blue cats, four channel cats, and five gous. So, that was twenty-one fish and twenty-two fish for the two consecutive days I baited it. Forty-three fish is plenty enough to clean, for me at least. I cleaned them all yesterday afternoon and it took me 21/2 hours. Some of the catfish and most of the gous were too big to clean by hand and when you have to hang them it takes more time. But now the freezer is starting to look more respectable with about fifty catfish and fifteen gous in it. With the beginning of a stockpile, I can begin to think about trading. One thing about the line, I baited with about a dozen small live fish, and they were not touched in four days. This is odd because live bait usually catches something nice, like a ten-pound goujon or something like that. This time – nothing. Come to think of it, it has been a while since I caught a goujon of any size. I have noticed over the past six years we have lived by the river that I seem to be catching fewer and fewer large fish as each year passes. I think I’m fishing the same way, so I don’t think that’s the problem. I know I’m not fishing them out because the river is way too big for me to influence the fish population in a serious way; there is a constant source of new fish from above and below. That’s a good feeling. When you fish the dead-end canals and small bayous, especially in the marsh, you can catch most of the fish in this limited water, and then you have to wait until more fish move in, or you have to move your lines to a different place.
Earlier I mentioned that the best way to tell the difference between blue and channel cats was to look at the anal fin (lower fin just ahead of the tail). The channel cat has a rounded edge on the fin and a blue cat has a straight edge. I didn’t have a picture of both together earlier, but yesterday I had both and I think this picture shows the difference. 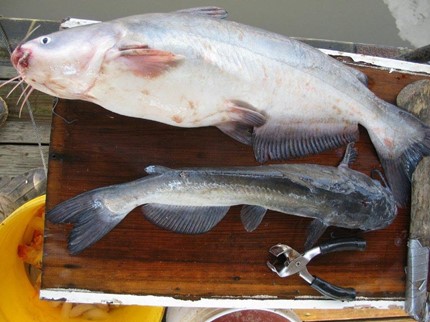 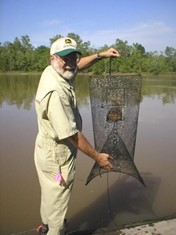 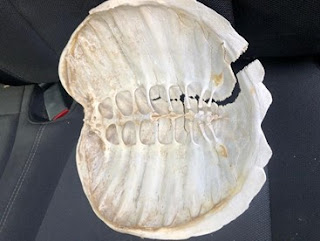 Jim Delahoussaye has made significant contributions to public awareness of his body of work  as a biologist, zooarchaeologist, herpetologist, anthropologist, and osteologist.
Preservation of Cypress Legacy

Jim promotes the stewardship of cypress trees in Louisiana --preserving 200 year old , alive at the time of the Louisiana Purchase in 1803.The Atchafalaya Basin swamp is filled with thousands of old-growth cypresses that were spared cutting because they were, for the most part, hollow or disfigured.
Jim points out  that several species of birds have special affinities for cypress and its swamp habitat.
Pileated woodpeckers carve their nest cavity out of old cypress trees.
Warblers’ nest in cavities and are associated with southern aquatic habitat. Northern parula warblers, another migrant, nest in the Spanish moss that grows in moist habitat hanging from the limbs of cypress trees.
Bald eagles  and ospreys  like the flat top of old trees because they make good nest sites for the large bulky nests. 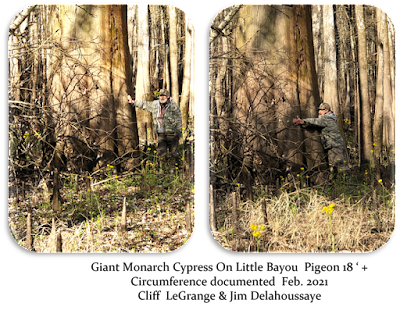 Documenting Archeological sites
Jim and  Cliff LeGrange, (member) of the  Atchafalaya National Heritage Commission have begun visiting the archeological sites that have not been tendered for additional mitigation in the Bayou Pigeon -Grand Lake Vector.

Site 16IB8 - La Montagne Bayou Pigeon
La Montange is Cajun French for ``The Mountain”.  ‘Mon_ton’  is phonetic slang that locals use to identify this place. The Montange is located near Big Bayou Pigeon and Bayou Mallet, a stream in the Bayou Pigeon/Grand Lake vector. La Montange is located in T 12 S  R 11 E, Sec. 2. This site is isolated and exceedingly difficult to get to in low water because the site can only be reached over land. It is usually flooded during the annual spring rising water of the Atchafalaya Floodway. Only a few Bayou Pigeon folks know its location, and most of them are over the age of sixty. The ‘Mon_ton’,  has always been considered a secret spot by the locals, because of its remoteness, difficulty to find and low water access. It looks out of place because it can be found on a ridge that is at least five feet above the floor of the surrounding swamp. The site was first described in 1952 by Kniffen. Further attempts to relocate the site were unsuccessful in between 1952 and 1973.  During all my years of research in the Atchafalaya Basin, Jim Delahoussaye was the first person I ever met who recognized “Mon ton” as an official State Archaeological site. 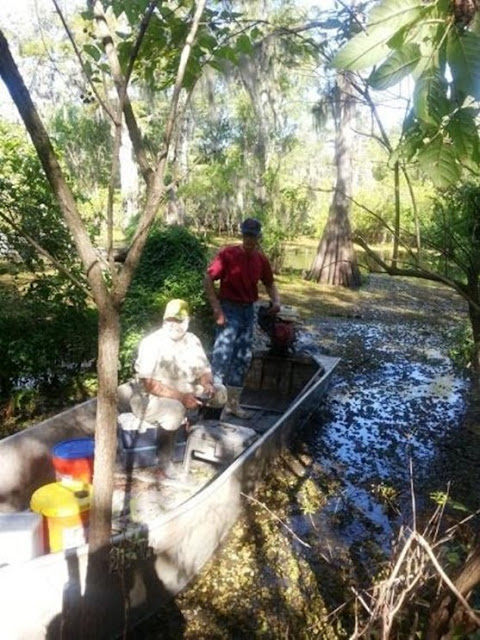 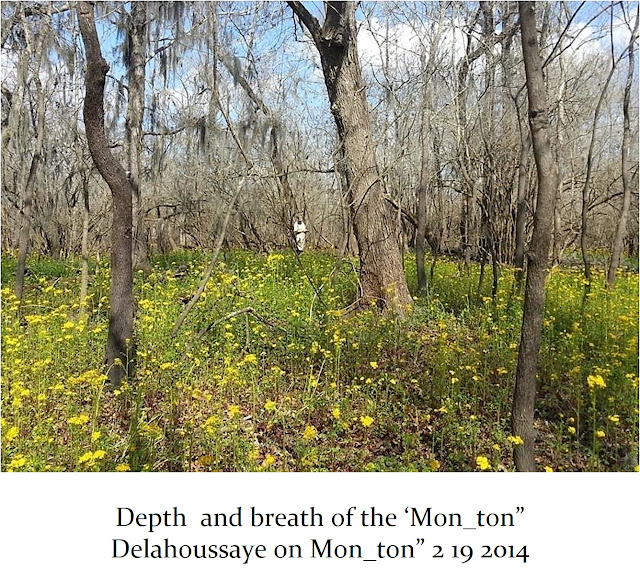 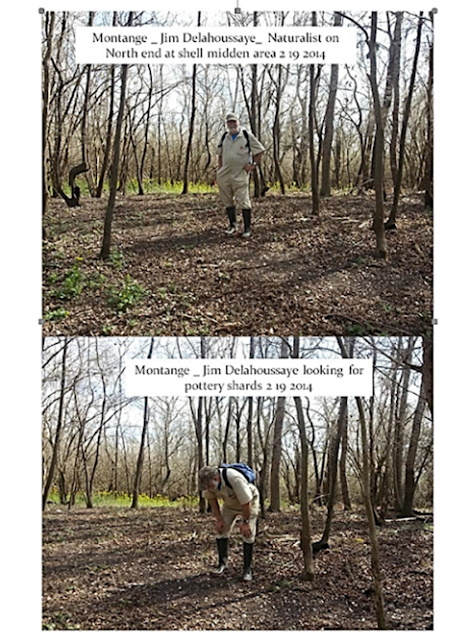 Houseboat Communities
Between 1920 and 1952 there were at least ten separate locations where people congregated into small communities in the interior of the Atchafalaya Basin. More than fifty houseboats and shanties were moored/built on the natural alluvial levees of streams and were constantly occupied from Morgan City in the south to Hog Island in the north. Many of the houseboat locations were situated next to high ground which were the same locations chosen by prehistoric Native Americans. Most of them were located in the Grand Lake area of the Atchafalaya  Basin.
The US Army Corps of Engineers creation of the Atchafalaya  Floodway in 1936 eventually caused the abandonment of these locations leading to the creation of levee communities along the edges of the Levees of the east and west Atchafalaya Floodways. People transitioned from a nomadic existence in floating houses to cars, towns, and electricity and lawn mowing machines.
Jim has documented this lost history. His information is included in the US Library of Congress, American Folklife Center, Riverlogue Blog, and presentations
16 IB 45,46 &47 Catfish Bayou At Grand Lake Iberia Parish
On Catfish Bayou at Grand Lake on the 1832 Meander Line  of Grand Lake -Iberia Parish
2021 – Jim  & Cliff with Descendants of Families That Live on The Site 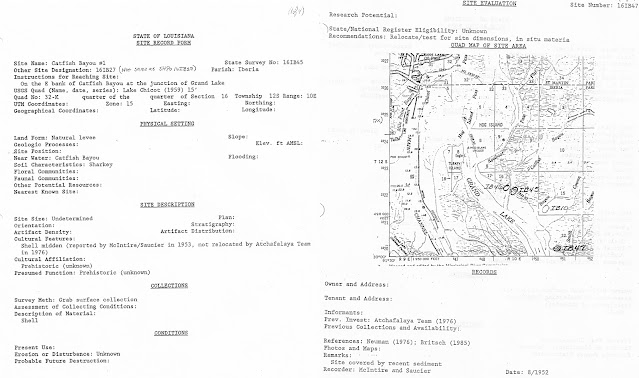 The  sites  are similar to La Montagne Bayou Pigeon; they are not easily  found because of Grand Lake accretion and sedimentation and require long walks to get to them.
Without Jim’s research, the history of this site would become obscure.
Thus far Jim and Cliff LeGrange have visited and updated three known sites and one previously unknown site.
Poet Laureate ?
“Jim Delahoussaye - I wrote this poem in 2002 entitled ‘Atchafalaya Is”, to remind myself of why the Atchafalaya is important, both as a physical entity and as a concept. 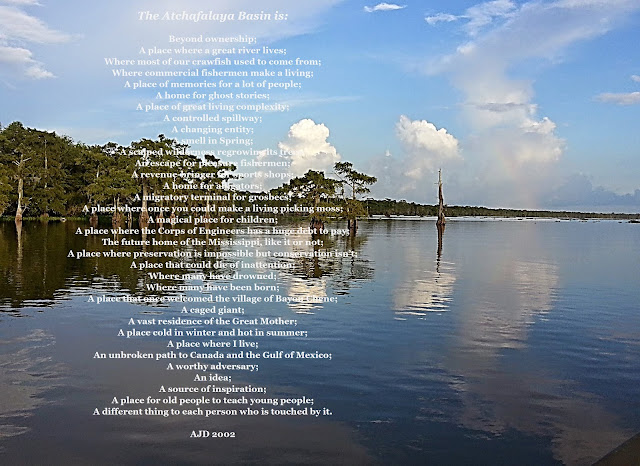 “Swamps are often seen as places of powerful energy or as murky, dangerous places, home to a profusion of noxious plants and poisonous animals. The  Atchafalaya River Basin Swamp is constantly adapting to climate, ecology—and even the changes that humans bring. The Atchafalaya River Basin  has its own folklife, culture and lifeways.
“The Swamp changes depending on the seasons, from quiet, warm, slow flow to rises of eighteen feet or more. There are changes in the lives of the people, the birds, fish, amphibians, and reptiles that use the river. The landscape in the basin changes as well with the seasons.”
Why does his work matter?
Because …The Atchafalaya Basin is a National Treasure ! Jim is constantly watching and protecting the environment.
Someone needs to explain these things to the jurisdictional agencies who make the rules and set policy. Jim’s work helps thousands of people who use the Basin resources to make a living and/or enjoy outdoor activities understand and appreciate its value.
This just a small samplings of his life long work…
Jim’s life’s work has been to document, preserve and protect  the Atchafalaya  Basin  and the Natural world.
Help me Congratulate him and Jim ....keep on keeping on
Bayou  Pigeon, LA. Spirit of the Atchafalaya
Posted by Chachie of the Atchafalaya at 7:02 PM No comments: