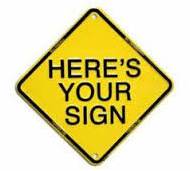 This Blog posting  is  about SIGNS….  in the  Atchafalaya Basin/ Floodway  .

For the record, polls / surveys  reveal that most people view signs  in scenic places as intrusive and that they  take  away  from the natural visual environment and beauty of the outdoors…

With that said that said  I do realize there are many legitimate  reasons  for  signs and  some are absolutely necessary ie., ‘Warning Signs ‘calling  attention  to an unexpected  waterway condition / obstruction.

In some cases signs, done skillfully have a great potential in contributing to the sense of  importance  / history  about a place, ie., historical markers.

The  stimulus  for this  blog post… is that I  have been noticing a lot of signs showing  up  in the Bayou Pigeon / Grand  / Lake Vector  of the Atchafalaya  Basin these days.  If you travel the Basin  from  the Bayou Pigeon public  boat launch… in the  main bayous you've probably noticed  this as well.  At times, it seems  you can see a  sign  at anytime  in your visual line of  sight.  It  makes you wonder, are all these signs  really necessary ?

Are they  helpful, or  do they reduce the visual environment of the Atchafalaya swamp?

I’ll let  you the readers decide  for yourself.

Prior  to the 1940’s  / 50’s there were just a few signs   relative to trespassing  and  land  ownership, in the basin.  A tradition of tolerance  had developed among the landowners  for  the Swampers regarding  fishing, hunting  and trapping. Basically a  culture  had developed  in the early 1900’s  that  the landowners  allowed Swampers   to hunt, fish and trap fur wherever  they found  fish and  game . This  was primarily because the area was  isolated  and the Swampers lived on houseboats versus the land and they moved  around a lot…, ie. they were not long term Squatters.

Most  Atchafalaya  Basin landowners  have always had signs  stating posted  / no trespassing  marking their property lines.   What does the posting of No Trespassing signs accomplish?  "Protection from Property Liability“.  Law Code requires that land owners post conspicuous signs near the primary entry points of the area that  are closed to the public.  In the  Atchafalaya  Basin they are typically small and  strategically placed.   When the signs are  high quality and well maintained  the landowners credibility  / professionalism is enhanced.


The  company internet web site  says, ‘Williams inc. is a privately  held company which has been operating in Louisiana since 1935. It is the successor to the F. B. Williams Lumber Company and its affiliates which began operations in 1872. Williams, Inc. and its affiliates currently manage over 85,000 acres of land located in 13 parishes in South Louisiana. The company has continued a tradition of protecting and enhancing the value of its properties by prudent and responsible management. There lands are managed as a renewable resource and some of our hunting and campsite lessees have been with us for generations.”

My  experiences  are, with Williams Inc. that they are professional and  keep  their property lines clean, clearly visible and unobtrusive.  . Why  do I say that?  They use small, long lasting metal signs , attached  with minimum nails, ( 2, Galvanized), strategically located  for long term sustainability.  Property  corners highlighted by blue paint  at the start  and  show  the N/S, E/W  direction… of the line. Periodically on  heavily  traveled  Oil & Gas  access canals  they will have larger signs marking their property line. 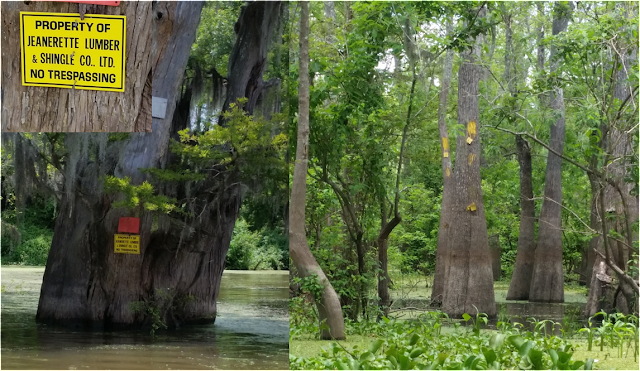 A name most  folks in  Atchafalaya  Heritage  are not familiar  with.  I don’t  understand why, he was  listed as  one of  the 100 Eminent Lumbermen of the United States.  Mr. Downman  controlled the Jeanerette Lumber & Shingle Company, Limited, at Jeanerette, Louisiana;  the Bowie Lumber Company, Limited ; the Des Allemands Lumber Company,  The Iberia Cypress Company and the White castle Lumber & Shingle Company. “ He  was as well known  and prolific   ine the Cypress  Timber business as F.B. Williams,  who was called ‘The Cypress King” of but  he was of  a lower profile.

My  experiences  with Jeanerette  are  similar to Williams  inc. Their property lines are marked and current. They use small, long lasting metal signs , attached  with minimum nails, ( 2, Galvanized), strategically located  for long term sustainability.  Property  corners highlighted by yellow paint  at the start  and  show  the N/S, E/W  direction… Many Oil & Gas  access canals   have there names  listed as well. 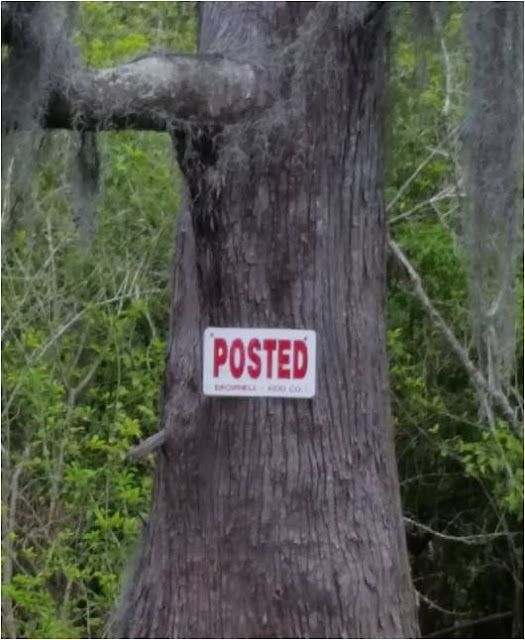 The Brownell Land Company is the 21st century legacy of the Brownell family in Louisiana beginning in 1880.

He was mayor of Morgan City from 1951 to 1983 and served for the State House of Representatives from 1948 to 1952. The Brownell family is known  for participation in philanthropic activities and charities.

The  company owns land in St. Martin, St. Mary, Terrebonne, Iberia, Assumption, and Iberville Parishes. Is a  major landowner  in the Atchafalaya  Basin.

The CEO, Michael Vanover, is the son of Dr. Charles Russell Brownell Jr. and took over when Dr Brownell passed in 1989.

My  experiences  with Brownell Land  Co.  are very positive.  they have  strong  connections with the  'Folks'  in the Atchafalaya  Heritage parishes.  They view their lessee's as  assets  and depend on them to be there eyes and ears on the property.   Mike Vanover personally makes a once year  trip through their entire landholdings.

Is the is the descendant of the  Kyle  Lumber Co which was established in 1866.

Newman  Trowbridge  Jr.,  who died in a  scuba  diving  accident in 2014, was the long time  leader of  K-P Management from the early 1970's .  In my opinion, he was the  single most important person in representing Louisiana  Atchafalaya  Landowners interest in preserving  private property and at  the same time accommodating a multi use strategy to sustain / preserve the Atchafalaya Basin.

Making the  Atchafalaya a  National Park / Preserve  and closing down the land to everyone but hikers and birdwatchers is and was not a popular plan with local folks. 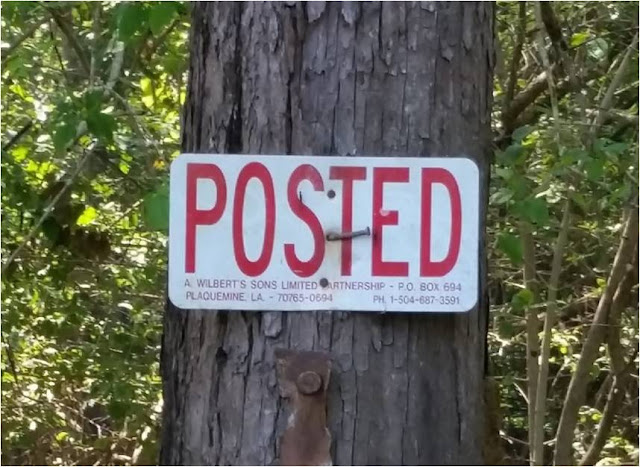 
Located in Plaquemine, La.  has been around  since  1848.  Today they own  thousands of  acres of land in 10 Louisiana parishes located in  the  Atchafalaya heritage  area.

A. wilberts has played a  large role in preservation  of  Atchafalaya  Basin wetlands and community projects in  Iberville Parish and to the  community of  Bayou Pigeon, LA.

They maintain posted / no trespassing signs on the major bayous.

There  are many  smaller  land companies  located in the Grand  River -  Bayou Pigeon  vector of the Atchafalaya  Floodway. 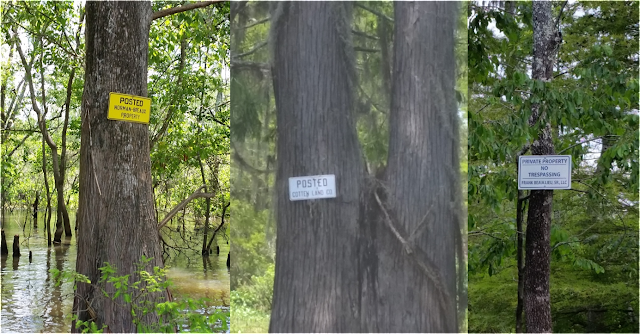 The  state of Louisiana  owns thousands of  acres in the  Atchafalaya  Floodway as  well… The  Dow Chemical  Co.  donated  50,000 acres of land  to the  state in the 1970's. (the old  Schwing  Lumber co.)  They put signs  on their property as well.  There signs  are  sometimes questionable because they put  up signs on disputed  property that are  claimed by private  landowners as well. 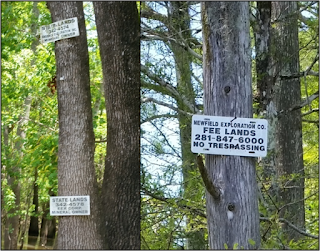 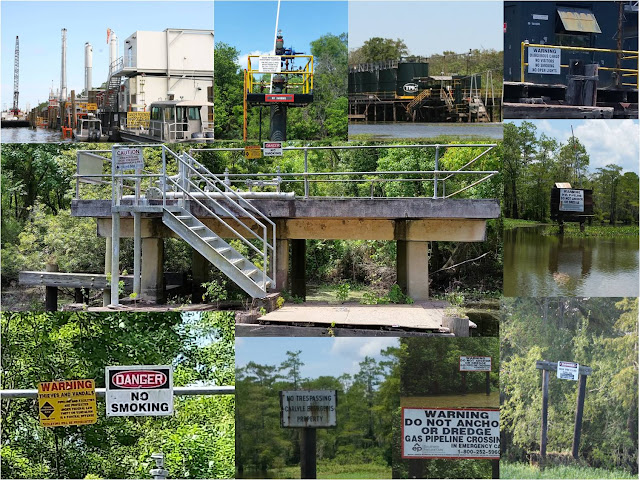 The 1940’s  saw the beginning of Oil & Gas industry in the  Atchafalaya  Basin Floodway. Throughout the 1950’s and 60’s access canal were dredged through the  swamp, Oil Wells  drilled, production facilities  and docks  constructed.  Thousands of miles of pipeline canals dredged and pipe laid.  Facilitating a  whole new era of  Swamp  signs…

Starting in the late 1970’s leases  for hunting rights  began appearing in the  Atchafalaya Basin…particularly  in the Grand Lake / Bayou Pigeon vector.   Tradition and culture  since 1900’s  had developed,  that people hunted, trapped and fished where they wanted.  The Landowners  tolerated  that trespass. Even though the landowners  already had  property signs hunting  Clubs  add there own  signs.

Today it seems every inch bayou frontage is leased… Hunting club  signs are everywhere, in some cases it seems every 100 yards … and  they are made out of every  conceivable  type of material… from  plywood,  55 gal. drum lids, 5 gal bucket tops, vinyl siding, waterproof coated paper, metal , and corrugated plastic.

Recently, at the boat launch someone asked a  sport fisherman, where he caught his fish  and  he said … you know on Turkey Bayou…this guy  had no idea  where Turkey Bayou is , all he knew  there was lot of  signs  that said  Turkey Bayou… 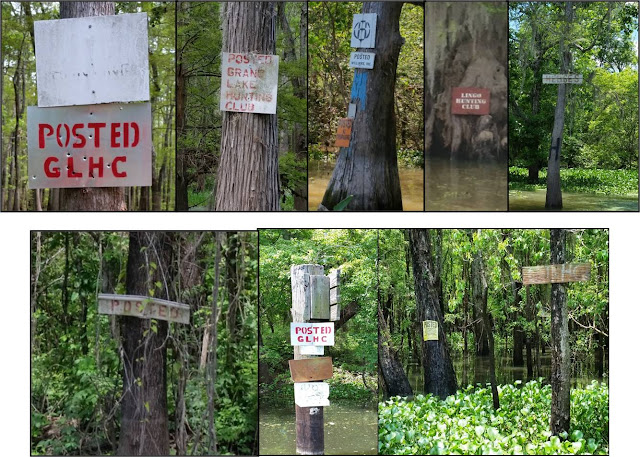 Signs are nailed to trees, pilings,  platforms… it doesn't matter… 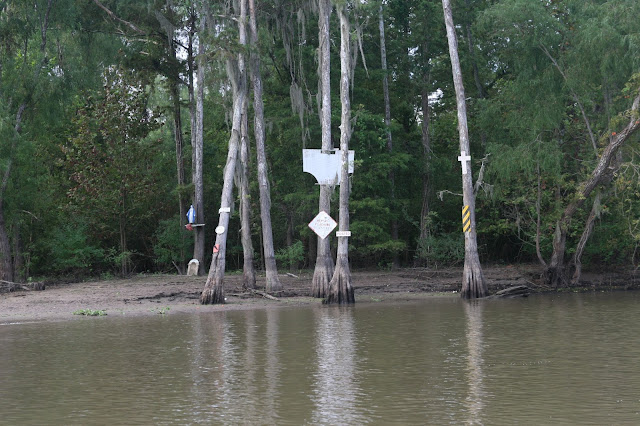 Our Lady of the Atchafalaya
Through Your Intercession Guide all who View, Fish and Hunt , safely  through these  waters. Protect  from Unseen Logs, Stumps, Tree Limbs, Pilings and Outlaws.
Keep the Waters Clean and Swift, the  Sky Clear, that all God's Species can Swim, Jump and Fly…
God Bless our  Swamp 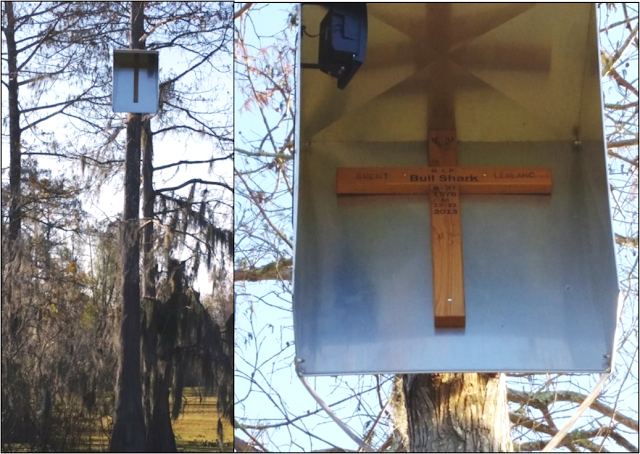 It seems good to mark and to remember for a little while, the place where a man died.

Not every graffiti writer is equally skilled at their task, some  are better than others…
these guys have some creative  ability.. 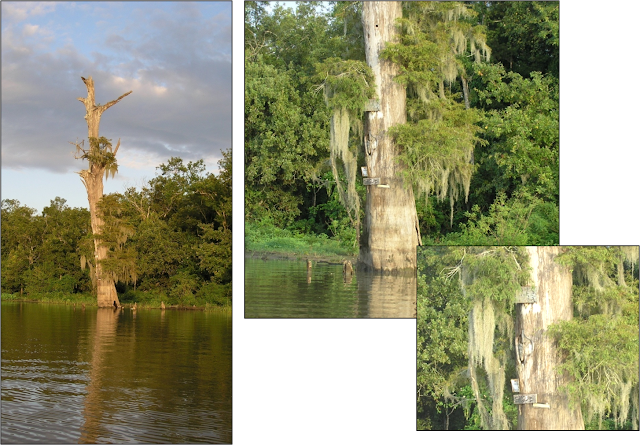 I consider this high water marker put up by  Alex Settoon and his daughter (Kim) in 1973  to be an Historic Marker…even though it is not your  typical state  sponsored  historical marker…it is hallowed  ground ... viewed by thousands of people since it was put up... 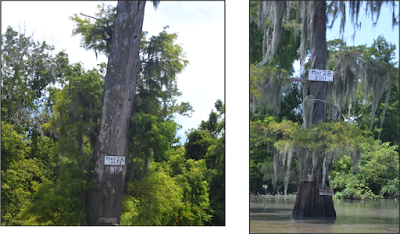 In 2011 original sign refurbished… and another new marker  for 2011 put up  by same daughter,  Kim Settoon Leblanc 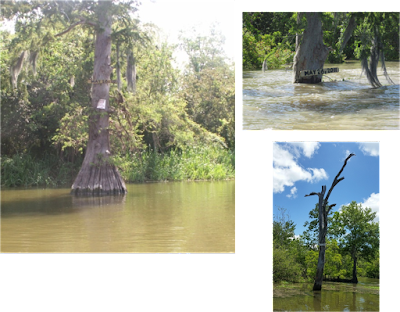 It seems  as if  everyone wanted to get in on a sign... new  high water marks on Grand  Lake  and  Reed Canal... 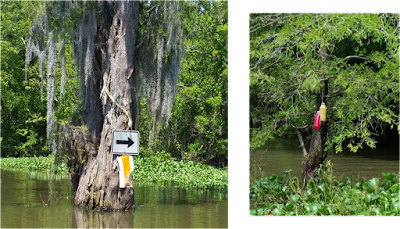 Sometimes you have to mark the trail / path  for some people... 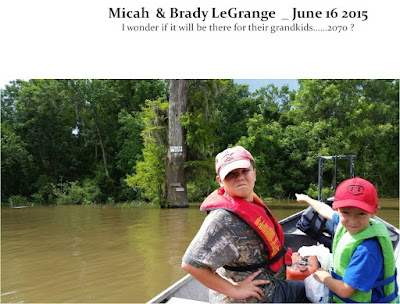 The best way to preserve our history / culture / folklife is to teach it to them...and tell them to pass it on to future generations...

“I do love a good sign… Signs tell the rules, and rules keep everyone happy.”  however  when there are too many signs they become ignored…

Enjoy !
Posted by Chachie of the Atchafalaya at 5:51 PM