Spawning A New Generation Of Hunters And Creating Marksmen 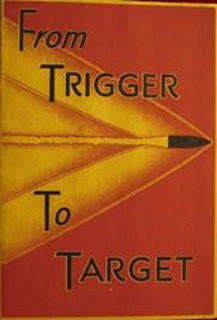 I am very honest about explaining what I am trying to write about / accomplish when I begin these postings.  So that the reader can determine if they want to the take the time to read the  entire posting.

For a while I have wanted to write a couple of new blog stories:

1.About hunting and why we need to introduce new hunters to the sport., i.e.., young people have so much to entertain them these days and are leaving the sport.

2.About Shooting long distances e.g., over 300 yards, what knowledge is required. I like hunting rifles, as someone once said " The only interesting rifles are accurate  rifles.

What has been holding me back?

After some thought, I asked myself, what kind of stories would interest  the people who are already familiar  with this blog.  Obviously, anything about Bayou Pigeon Folk life, History and Guns.

I know most of the men that I see on the Pigeon Facebook friends list are passionate hunters. Most hunters like guns and have more than one. Cajuns like to shoot anything before they eat it.

I like stories that weave in educational aspects as well as entertaining to read. If I can connect Bayou Pigeon Folk life, Hunting and Guns,  I  would have a  good story line.

It was called Creative Writing 101, in college. It is Easier Said Than Done, to write an articulate  story.

You don’t hear baying hounds and see a lot of Winchester Model 12's shotguns of yesteryear. The legendary deer hunters of  Bayou Pigeon, like Mr. Pep Landry and Mr. Monroe Settoon have ‘Gone Missing’.  Notice the “misters.” Cajun culture quietly mandates the title mister before a respected deer hunters name, be it his first, last or both. No young people called them Pep or Monroe.

In the 1990’s most landowners stopped the hunting deer with dogs on their lands, with nowhere for the dogs to run, dog hunting disappeared from hunting clubs. Still hunting only became the dominant form of hunting deer.

Moving away from hunting deer with dogs  changed hunting  styles. Why, How ?

Because deer are primarily Crepuscular animals, thus they are very difficult  to hunt in day time. Without dogs and drivers  to move them  around in the daytime they stay put in their bedding areas.

Without dogs and  drivers to move  deer, hunters started hunting  from elevated blinds / stands, i.e.., homemade tree stands, and / or ladder stands with rifles and bows, trying to ambush the deer in twilight hours when they are moving to feed. 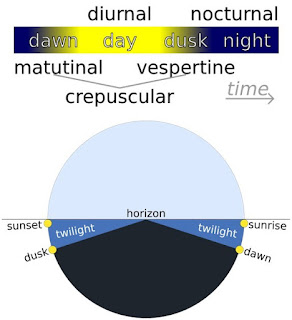 In the Atchafalaya Basin, during the day deer are deep in the swamp for protection and there they just sit out the day. In early morning and evening, they’ll come out to feed on high ridges and edges of swamp terrain.

Sometimes this requires long shots, such as watching down a pipeline or power-line right of way.

Gone are days of sighting in your trusty 30-30 lever action by hitting a 5-gallon bucket at 50 yards.

Minute of Angle - From Trigger to Target

Did you realize that hunting can teach your kid one of the 3 R’s…’rithmetic.  Hunting is a science ie.,  an ethical hunter has to be marksman. A person's level of shooting proficiency is referred to as his/her marksmanship.

The rifle scope is basically an optical device that has telescoping lenses, which makes it easier to hit targets from a long distance. Today, they play a huge role in hunting and shooting.  Rifle scopes are meant for extreme situations, where you cannot make a great hit with your bare eyes. Not to mention those of us  with aging eyes.

Rifle scopes play a huge role in ensuring that the shooting experience is made easy and enjoyable as well. The rifle scope is endorsed for a more safe and perfect shooting in the  field.

Hunters must know  and understand how to adjust the elevation (up / down)  and windage (left / Right)  to 'sight in"  the rifle.

This where “MOA” = Minute of Angle comes in play.

MOA is the unit of angular measure for adjustment of the scope to get on the target.

To understand MOA, you must first know some ’rithmetic, let’s review some basic mathematics ...

A circle is a shape with all points the same distance from the center. It is named by the center. The circle to the left is called circle A since the center is at point A. If you measure the distance around a circle and divide it by the distance across the circle through the center, you will always come close to a particular value, depending upon the accuracy of your measurement. This value is approximately 3.14159265358979323846...

We use the Greek letter   (pronounced Pi) to represent this value. The number   goes on forever. However, using computers,   has been calculated to over 1 trillion digits past the decimal point

Important information can be determined for real life applications based on the parameters.

Angular Measurement of a Circle

It is used for measuring in the study in the sciences of astronomy, navigation, and in shooting sports, where man made optics (scopes) are used and thousands of other real life applications.

Most Engineers, Mathematicians, measure a circle in degrees. A circle is divided into 360 degrees.
An angle is the space between two straight lines from a singular point, i.e., the center of a circle. 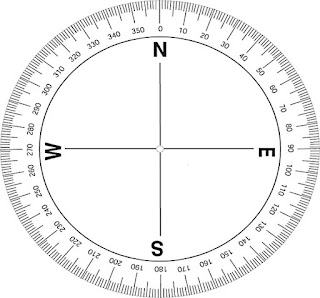 In the USA  system, a full circle is  divided into 360 degrees.

Why 360 degrees? Probably because old calendars in ancient times used 360 days for a year, i.e.., when they watched the stars, they saw them revolve around the North Star one degree per day.

MOA – is an Angular measurement, which Works cohesively with the U.S. measuring system. 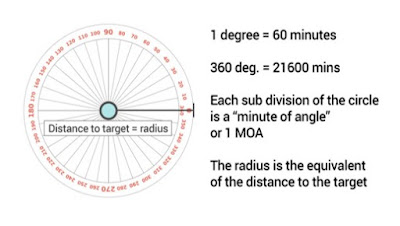 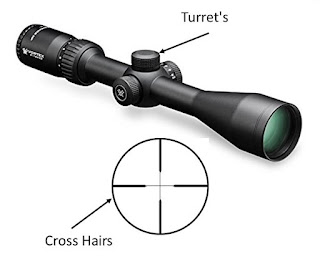 Turrets are a critical component to the rifle scope. If you’ve never seen a scope, they are the little knobs on the top and most commonly the left-hand side of the scope. Occasionally you have three turrets, but two turrets are universal. The overall job of a turret is to make the adjustments necessary to zero an optic.

Most hunting scopes have covers you can remove to show a little dial with graduations.

All rifle scope cross hairs adjust elevation (up and down) and windage (left to right).

To get your bullet to hit where you want it to go, you make adjustments to your rifle scope, (i.e.., to get closer to the bull’s-eye) in MOA, up/down or left / right, whatever is needed.

Hunting scopes often have tactile click adjustments that are typically ¼ MOA, some scopes have a ½, MOA adjustment. 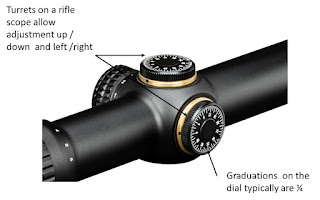 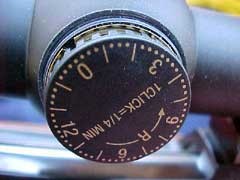 Scope Manufacturers use MOA (angular measuring system) to set the scope to get closest to the desired point of aim (bull’s-eye).

Remember, 1 MOA is always 1 MOA regardless of distance. When you add known distances to the mix, you can translate MOA to linear size downrange

If you know the size 1 MOA equals at any known distance, (you must know the  distance) you’ll know how much adjustment you need to achieved desired point of impact. 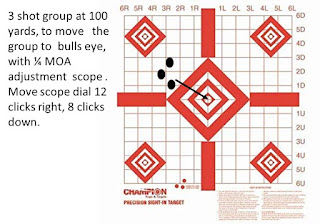 For distances beyond 100 yards, you must also know Rifles Ballistics i.e.., your bullet drop for the distance, for your rifle, ammo, and conditions, i.e. Caliber, Bullet weight, Velocity (FPS).
Point Blank Range

Knowing your Rifles Ballistics, most hunters sight their hunting rifles to be approximately 1.5“ to 2” high at 100 yards. This makes, most center-fire hunting rifles hit dead on at 200 yards.

This is considered optimum, because  for most medium range high powered rifles bullet drop at 250 yards will be less than 5 inches. This allows for what is called point-blank aim point, i.e.., no hold over needed. This will a put bullet in the kill zone of deer size animals. 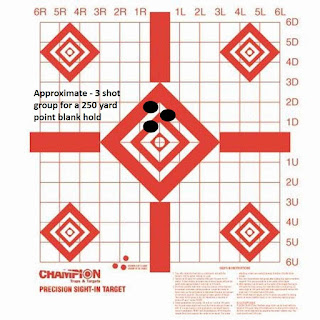 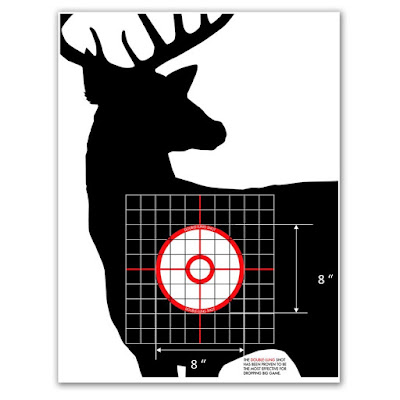 Point Blank hold  for up 250 yards to Target

Many modern scopes come with Bullet Drop Compensators  where additional marks on the cross-hairs are in 1 MOA. 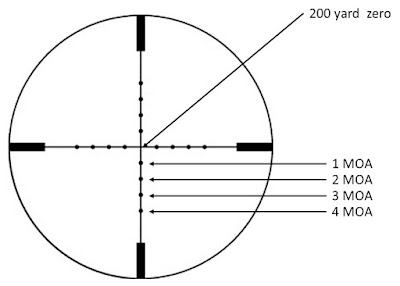 Therefore, if you know ballistics for your rifle, ammo, and conditions, i.e. Caliber, Bullet weight, Velocity (FPS) and projected bullet drop. Bullet  drop can compensated for. 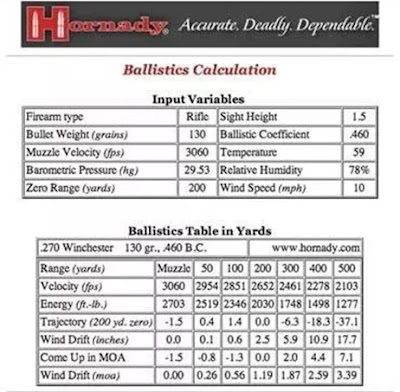 Always think in increments of 1 MOA for whatever distance you are shooting.  For example, imagine you are shooting at 300 yards. You know that a MOA spreads out 1″ per 100 yards, so 1 MOA at 300 yards is 3″. You have sighted in your rifle to be +1.4 inches at 100 yards, per the chart above. Therefore, for your calculations at that 300-yard target, you should think in 3″ increments. By doing so, you can easily see that requires you to elevate 2 MOA to compensate   for -6.3 inches of drop in the chart above.

Shooting & Hunting are a science lesson in and of itself, therefore school learning of 3 r’s  is required to be a good hunter.

Hunting is necessary… we need to spawn new hunters  for the future!

Hunting is not only about killing of one of nature’s creatures. It is well documented that hunting teaches many positive life skills, such as ethics, and integrity patience, proper preparation, endurance, realistic expectations, the ability to cope with disappointment, the ability to overcome difficulties and how to or not to respond to the unexpected. Not to mention, gun safety, the environment and conservation.

Researchers found that when it comes to problematic overabundance of animals, hunters serve their ecosystem well. By helping with regulating populations, hunting helps  the environment as well.

Despite what you may have heard or read annual hunting licenses sales across the USA are holding steady. Over 15mm license hunters in 2018. 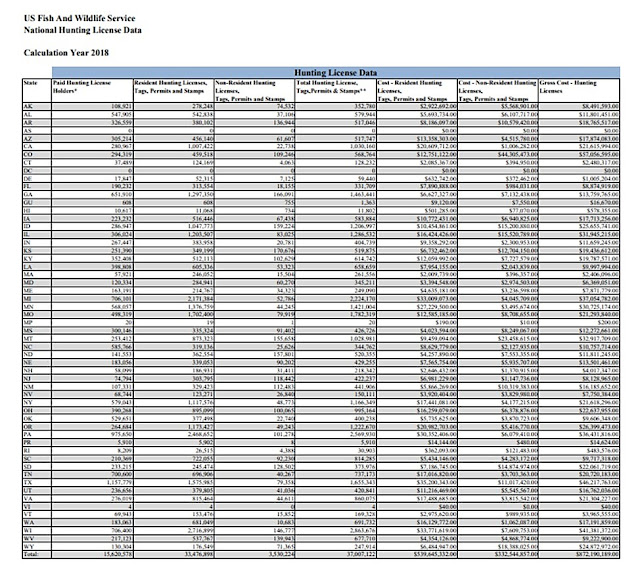 However our population is increasing! License  sales are not keeping up with the increased population!
"It's questionable whether there will be enough hunters in the future to really manage wildlife populations!


I hope this story informs, entertains the readers on why it is important to facilitate new hunters and that hunting demonstrates & can teach practical  use of school learning. Therefore, it is a value adding pursuit.

This hunting season take someone new to hunting with you.  Remember the excitement that came with your success in your early days hunting…

Posted by Chachie of the Atchafalaya at 4:57 PM