1922 - A Trip Down the Grand River, the Eastern Gateway of The Atchafalaya Basin 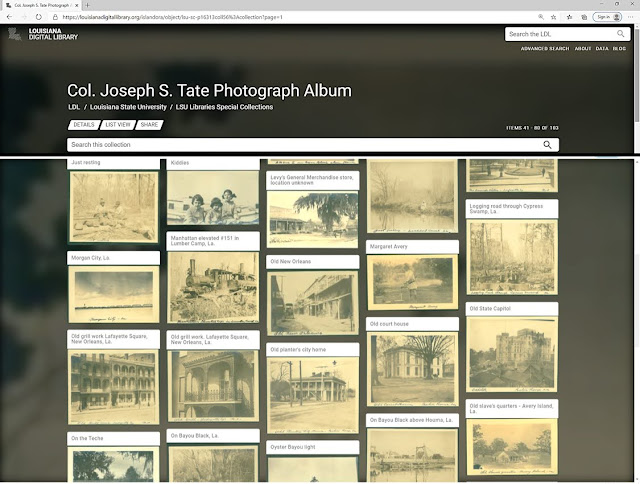 The Joseph S. Tate photograph album (unbound) contains 103 black and white photographic prints mounted on paper, c 1920’s.  The  LDL  clearly states, it is not known whether Joseph S. Tate was the photographer, but it is known that the album was his property. The photographs  are listed  as circa 1920 with the understanding that the actual dates are not given.

These images includes scenic bayou images and  cypress lumbering images.  I have seen  some of these pictures in  this collection used in various  other publications / papers on the  internet.

All the images used in this paper are available on internet, and are used in accordance with Fair Use, Title 17 USC section 107 in this writing.

Was born in Pennsylvania in 1894. A 1917 graduate of West Point, Tate was a field artillery officer who served in both World Wars. In 1950 he was appointed commanding officer of the Louisiana military district. Tate died in New Orleans, December 10, 1963.

Since he graduated from West Point in 1917 at the age of 23, the decade of the 1920s would be a possibility for his photos.

Reviewing the collection I quickly realized, that some these photographs  are images  from several locations on Lower Grand  River  from Bayou  Plaquemine  to Morgan City  (ie, Eastern Corridor  of the  Atchafalaya  Basin) and then they follow Bayou  Black  on to the  Houma, LA.  area.  The photographs  all have  similar  markings and lead one to believe they were  /  could have been taken on the  same trip.

These images are prior  to the  Atchafalaya Floodway being built. A  fact  that makes these photographs much more important , because they are the last photographs of this  specific  area before the U.S.  Corps of  Engineers  started manipulating  water  flow the Basin.

Eastern Corridor  of the  Atchafalaya  Basin

This  Eastern edge of the Atchafalaya  River Basin was  traveled north by  south by many famous early  Louisiana explorers.  William Darby, James Leander Cathcart, Mathew Carey  and Maxfield  Ludlow  to name a  few of the  early  explorers.
Bayou Plaquemine  served as the Gateway  to the  Basin, because  it was the first distributary  of the  Mississippi  river  northward from  New  Orleans to the interior  of the Atchafalaya Basin.

Although, Bayou  Lafourche shoots  off  from the Mississippi before  Bayou  Plaquemine  it does not lead directly into the interior of the  Atchafalaya.

Bayou  Plaquemine  has been  the Eastern Gateway to  the Atchafalaya  Basin  since  the late  1600's.

The  water route starts at the  Mississippi  River entrance into  Bayou  Plaquemine, where as Bayou Plaquemine  joins  upper grand river, south of that  confluence is known as  Lower  Grand river.  From there the  Grand River  flows past  Bayou  Sorrel and  Bayou Pigeon, into  Bay Natchez pass.   Where Little  Bayou  Göddell intersects  Bay Natchez the lower  Grand River  becomes known as  Big Bayou Göddell.  (Göddell is a  cajun shorten version of ‘Bayou  Go To  Hell from early  1800’s) .  Below  the intersection of  Old River  with Bayou  Göddell, the names changes  again to Belle River.  Where Bayou  Long insects Belle River, the name  changes  again to  Bayou Magazille which leads to 4 Mile bayou, to the north is  Lake  Verret  and to the south  through Grassy Lake  and  Lake  Palourde  to Berwick  Bay.   From there you can  access  Bayou Black to go east  to Houma  and  Thibodaux.

My theory about  some of the Tate  collection, is, that the photographer  of these photographs more than likely  followed  the water route  outlined in   the paragraph above in some type of large boat, ie. in one photograph  the caption says  ‘from the forward  deck”, leading you to believe he was not in pirogue or  bateau, but a larger boat..

This map of the red cypress territory of southeastern Louisiana was the  first ever produced in print.  At the time of its  first publication no government map was obtainable by the general public of which accurately portrays the water courses  of the  Atchafalaya  Basin. Heretofore no private enterprise had ever undertaken to make such a map for general circulation.  This base map is  from the  time period  1892 - 1919, making it even  more valuable because it is a map of the Basin  when it was a free flowing  waterway and the bayous  were not  altered by man.

This map will be found to be of great interest to  all . It was made Mr. Downman’s engineers and  timber cruisers.

How  do we know that this picture of ‘The Big Store’  is the  Jack Millers  store  at the confluence  of  Bayou  Plaquemine  and  Grand  River?


My research   came up  with  this illustration of  Jack  millers  store,  by Mr. Stan Routh, renowned  architect.

I grew  up at Bayou  Pigeon along  Grand River,  on it almost every day until  I was 18 years old. This  picture   could have  been taken anywhere   along  Lower  Grand  River from  Bayou Sorrel  to Bayou  Postillion, the cottonwood trees, wax myrtle  and swamp privet  scrub shrub very  similar to this picture.  Especially in the area  known  as  Punkin  Point / Chopin Chute .

This picture   is somewhat of a mystery to me.  Bay  Natchez  would be south of Punkin  Point  a mile or two at most.  I know of no houses or  an area  that looks  like  this  in what is  known as Bay Natchez  today.

It certainly looks like this picture could have  been along  old  Bayou  Pierre Part.  Was it mis-labeled by the photographer, maybe.  But it is in the  Tate  collection, same format as the other pictures.

Picture 4 - Petit (Little) Göddell, Originally  ‘Bayou Go  To Hell’ from  Civil war era … shorten over the years by the Cajuns

The photographer obviously was trying to capture something about the terrain , but the picture being  B&W, it may have lost  something that caught of the eye of the beholder or was  it the palmettos.  The description does say ‘from the forward deck’ , indicating the photographer  was  in a  large boat other than a bateau.

This picture is most interesting, a steamboat in the Goddell! Rare  good photograph of a steamboat on the bayous of the Atchafalaya, outside of   the Carrie B Schwing and the F.B.  Williams Sewanee mostly what you see are drawings / illustrations.
Note the handwritten spelling of Goddell in this picture and the one just before… obviously same handwriting but different spelling.  Double d’s and l’s is the way USGS  map spells it.

Can  we validate  this is the real steam boat 'Owens'. 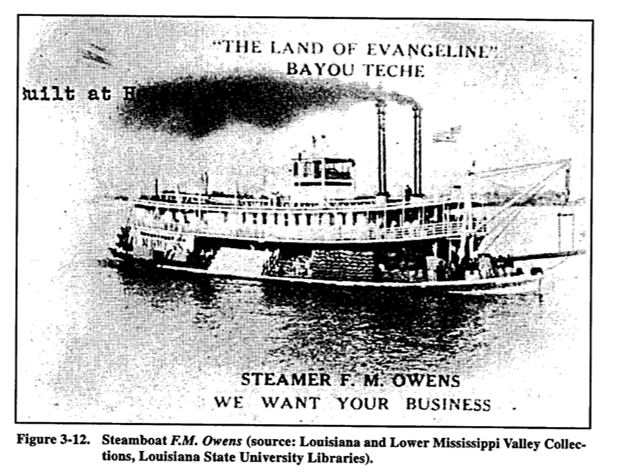 Double stacks, looks like the same boat to me !

Without  any landmarks in the photograph it is impossible to determine exact location. Due  to the width and breath of Belle  River in this  photograph, I would say it somewhere  south of current day  Graveyard Island. 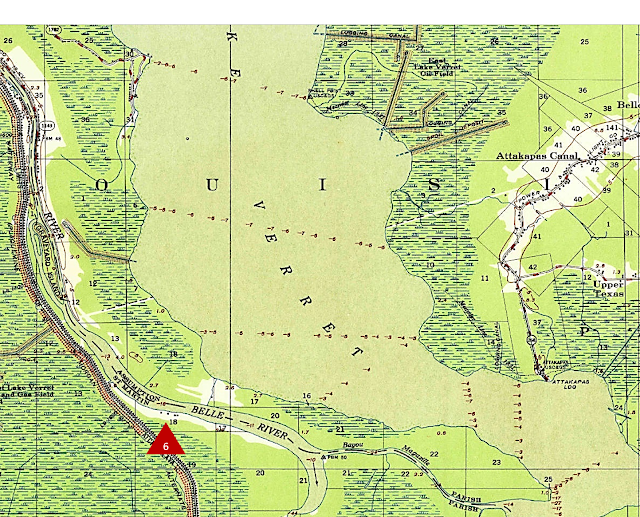 Note the 4 structures on the map, 10 years after the fact.


Without  any landmarks in the photograph it is impossible to determine an  approximate location of Photograph  7.  However the same location as  picture 6  is likely, note the trees.

This is the photograph that caught my most attention in the Tate  collection. The  Lana Laws Downing, Heaven & High Water, 2011, self published book  relates first hand   information  from her mother who was raised  in the  Williams Skidder camp on East  Lake Verrett. It is  of the exact time period 1922- 1928, of the  Tate  photograph  Collection.

It is hard to tell if this is Lake  Verret, but there are  subsequent  Tate  collection pictures that corroborate  that it is. 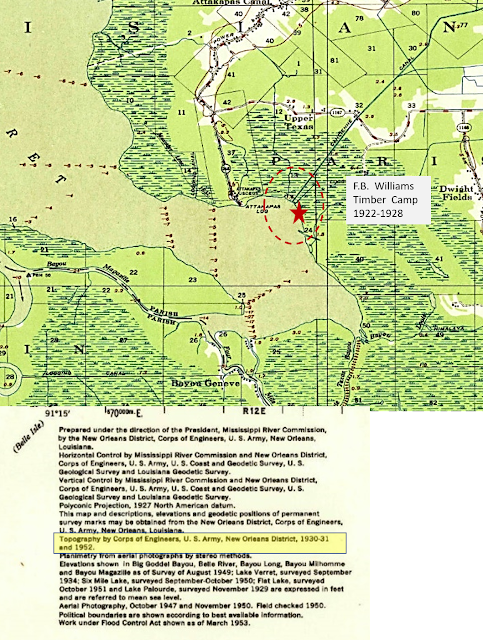 Remains of a cypress logging locomotive are located in the Atchafalaya Basin,  Lying in its final resting place on private property on the south shore of Lake Verret ... this locomotive was accidentally derailed and landed on its side. The wheels, fittings, cylinders, and other parts were salvaged; and the wooden cab has since rotted away leaving only parts of the frame and boiler lying on the embankment.

"This engine, when seen by Judge Ford, a recognized authority on South Louisiana Logging railroads in the early 1960's appeared to him to be a old elevated locomotive. As mentioned above. These rather strange tank engines came south after the big cities electrified their elevated lines and were used on logging and quarry lines. The  engine appeared to be a Napoleon Cypress Co (ex-Manhattan El Forney) class E #156... If this is true, this may be the oldest locomotive remains in the state of Louisiana. It was sold to Napoleon Cypress Co. in July 1904"

From Lana Laws Downing, Heaven & High Water, 2011, self published book ... "Uncle  ed's career as the driver of  engine  #30  was cut short when he wrecked the train  while operation under the influence ..he was immediately fired ... but was  asked to return  because  no one  else   knew how to operate the remaining train... the remains  are  still rusting undisturbed at the  site"

Since it same background coloring  and handwriting it is logical  that this is a  spur of the rail line of the  Timber Camp on  Lake Verret.

Again, since it same background coloring  and handwriting it is logical  that it is part of the rail line of the  Timber Camp on  Lake Verret.

Again, since it same background coloring  and handwriting it is logical  that it is from the  Timber Camp on  Lake Verret.

Again, since it same background coloring  and handwriting it is logical  that it is from the  Timber Camp on  Lake Verret.

From the Lake Verret  skidder camp , the Tate  expedition , continued  to Morgan  City.


It’s hard to follow the route of the Tate photograph  route and not yearn to have seen the landscape at that time period.

The process was, cut trees were hauled to the rail line via steam-powered winches on a device known as a skidder. They were then loaded onto special flat cars via a steam-powered log loader. Logs were hauled  by steam locomotives to the  shore  of Lake Verret  and  drop into the Lake from the rail cars causing a big boom ! . Where they were bound together by chains and spikes and hauled away by steamboats to the sawmill in  Patterson, LA. It was sunup to sundown hard and dangerous work.

The  Col. Joseph S. Tate Photograph Album  was  documenting  the   'Last  Stand',  the end of an era... for Atchafalaya  Basin  cypress  lumbering industry, albeit  he did not realize that. The multimillion-dollar cypress industry  that boomed in the Louisiana swamplands from the 1880s to the 1930  was ending. .

In 1928, when the FB  Williams Lake Verret Cypress Timber Camp pulled out  it was one the last operating old time  timber camps.

Expensive  camps for boating, fishing  and hunting now make up the area of the timber camp...

The isolation of the Timber Camp on the Lake Verrett shore (only travel to / from was by boat) made for independence from the rest of the outside world produced a strong-willed breed of people. A trait that followed   the swampers of the camp when the camp closed. Described so well by Ms. Lana Laws Downing’s book, “Heaven and Highwater, self-published 2011.


"The Ghosts of the Past Speak to All Who Will Listen" 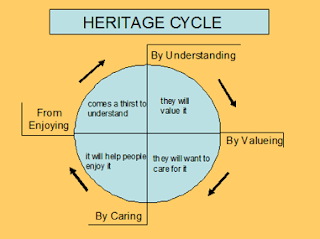 
Posted by Chachie of the Atchafalaya at 11:08 AM