In the Big Swamp, Race Just Seems To Adjust Itself.

In the  Spirit of Black  History Month

Excerpt  from "Bayou Pigeon, La. Spirit of the Atchafalaya"

Bayou Pigeon, Louisiana, is a small unincorporated village located in the southern tip of Iberville Parish, in the state of Louisiana.  It is on the eastern edge of the Atchafalaya River Basin and is part of the Atchafalaya National Heritage Area.  It is  considered as part of the Eastern Gateway To The  Atchafalaya.
The story of Bayou Pigeon is in many ways  the story of the Atchafalaya Basin. The  confluence of  Pigeon Bayou  and  Grand  River has been a populated place since 1843. From the antebellum period, the industrial cypress  logging period  to an era  where the primary pursuit of residents was exploiting the natural resources of the  basin. They eked out a living hunting and fishing.
Until the  mid 1930,s no official roads penetrated to the Bayou  Pigeon area, only a dirt path following the lower Grand  River.
Any inhabitant could live there at no cost and no government intrusion,  some  would say in a blissful isolation.
After the  creation of the  Atchafalaya  Floodway, The landscape of the community evolved  to a linear format along Lower Grand River at the confluence of Little Bayou Pigeon and Lower Grand River with the residents making homesteads along the high ground.
There is one bridge across that joins the residents who live on both sides. The geographic location is 30.04.'10.70" N - 91.17' 07.30" W. 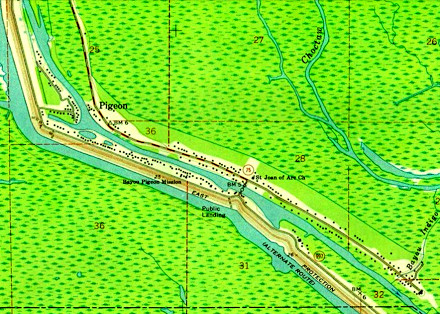 The 1940 US census  recorded there were 390 souls living at Bayou Pigeon, LA.  The majority of the families lived on houseboats.
The town of Plaquemine was 25 miles away, and the road  was  poor.
At that time  Bayou Pigeon  folks traced their ancestry from Pierre Part, La., another small Cajun Community in nearby Assumption Parish. Thus, travel to and from Bayou Pigeon was mostly from Pierre Part, LA. by water/ boat at that time.
Most Plaquemine folk,  thought Bayou Pigeon, was a semi-isolated community of levee dwellers who talked French and a little broken English.  That eked out a living hunting and fishing and did not have much formal education.
They were considered poor, but they had few prejudices, except maybe they did not trust government.
No African Americans lived at Bayou Pigeon, it was a pure unadulterated  Cajun Fishing  Village.
The Bayou Cajuns people there lived a simple life, they grew, caught, trapped or killed their next meal.  They sold what was extra when they could to earn a few dollars for other necessities.
In 1933 the building of a clam shell road from Bayou Sorrel to Bayou Pigeon started a process of Americanization in the history of the community.
With the opening of the new clamshell highway, one of the first visitors to travel to Bayou Pigeon was an African-American named Charlie Eads, Sr.
Mr. Eads started a peddler service to Bayou Pigeon, sometime before 1940. The exact year is not documented. With the clamshell road, what was considered  all day arduous trip was now a half-day trip. Mr. Eads’ flatbed truck was outfitted to serve as a store on wheels.
Mr. Charlie Eads, Sr. operated this peddler service route for approximately two years, after which time he turned it over to one of his sons, Charlie Eads, Jr., affectionately nicknamed "Bully" who operated the route to the late 1950’s.
Bully rode down the highway, stopping and blowing his truck horn at every five or six houses on the highway. Bayou Pigeon had two small grocery stores at that time, but Bully offered milk, fresh vegetables, fruits, some staples, some fish, meat, sliced bread and ice, the most valuable commodity of all. 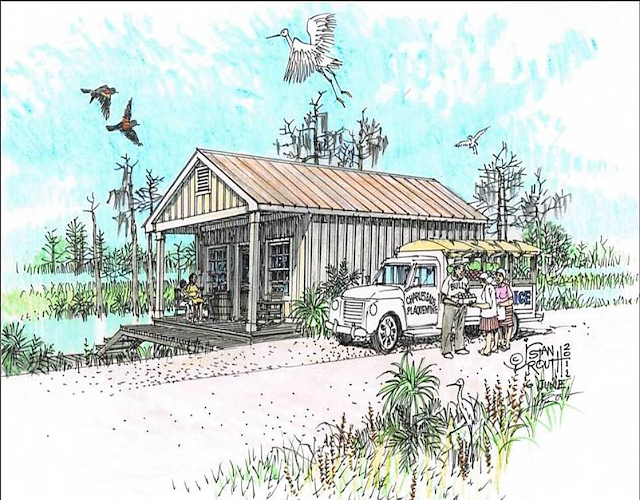 The Eads family children would get up at 4 a.m. to pick the fresh vegetables and load Bully's truck for his daily delivery to Bayou Pigeon.
At first, Bully served the community on the east side of Grand River.  Mr. Adam Landry born and raised at Bayou Pigeon remembers he would get in his father’s pirogue and paddle across the river to the Hwy 75 road and purchase supplies from Bully.
After the Bayou Pigeon ferry in 1947, Bully would cross the bridge and deliver services to folks across the bayou and made crossing the river by boat to get to him no longer necessary.
Bully always received a warm, “Bonjour, Comment Sa Va” welcome, because not only was he a source of goods not available in the community, but also he was a source of news and gossip and a link to the outside world for people who seldom strayed outside of Bayou Pigeon.
Bully would also do special favors for his customers such as going to the post office in Plaquemine and bringing Money Orders to his customers in Bayou Pigeon.
Bully was also a taxi service.
Mr. Curtiss Leonard, now of Morgan City, lived at Bayou Pigeon until the sixth grade, remembers Bully very well.  He and his mother would catch a ride with Bully for one dollar, to Plaquemine.  Bully dropped them off at Dalbor's store for shopping and they would spend the night at the Lamar Hotel.  Bully would pick them at the hotel the next morning and ride them back to Bayou Pigeon
Bully did this for other folks who had no other transportation.  All would ride in the front seat of Bully’s single cab pickup truck.
In the 1950’s when many of the weekend campers began to arrive at Bayou Pigeon, Bully would stop in front of their camps as well. He had a sense of humor and was always smiling.
Oh, there was always some modest negotiation, with selling goods, but there was never a feeling that someone had the upper hand, because Bully was black.
Bully had a great work ethic and personality He was known in the community as a trustworthy and reliable person.  In fact Bully was beloved by the community.
In fact, The Big Swamp had a history where racial issues just seem to always work itself out.  In the industrial cypress logging era, there were mixed race crews, who worked and lived side by side.  The work was rugged and dangerous, safety was a main concern.  Workers depended on each other to have their backs.
The same applied to all races and ethnicity that traveled around  and into  the interior  of the  Atchafalaya Basin.   When someone helps you  when your boat and motor  breaks  down and brings supplies to help you grow, catch or kill your next meal, who cares about race.
In 1959, Bully had health issues that forced him to end his store-on-wheels route to Bayou Pigeon.
If you enjoyed the story Bully Eads,  the book  has several  interesting stories, eg.,  Susan Verami,  the first documented resident and a Free Woman of Color at Bayou Pigeon and the Civil War field reports of  some of the first black Federal troops on patrol in the Bayou Pigeon / Atchafalaya Swamp. 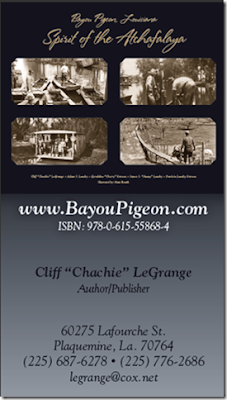 You can buy the book by contacting Cliff LeGrange at 225 776 2686 or legrange@cox.net
Posted by Chachie of the Atchafalaya at 9:50 AM