"The Ghosts of the Past Speak to

All Who Will Listen”

The purpose of this  particular blog post is connect the dots on what eventually happened to the Antebellum homes of the Sugar Planters at Bayou Pigeon.  The  Civil War ended the Era of Agriculture at Bayou Pigeon.  We have included a lot of data from our research because we believe it is important to be right.  “In God We Trust’ all others bring data / pictures.

Bayou Pigeon nestled along the eastern side of the Atchafalaya Basin, in extreme lower part of Iberville parish, today it is known as a Cajun fishing community but its origins are Anglo-Americans Planters / Farmers from the New Iberia / Bayou Teche area.

They came to build and operate Sugar Cane plantations in the late 1840’s.  After the U.S. government surveyed the Atchafalaya Swamp in 1832 – 36, the federal government and the relatively new State of Louisiana opened the newly surveyed land for land grants and sale.

The Riggs Family who hail from Accomack, County Virginia and came to Louisiana in 1804, and invested in agriculture land on the western edge of the Atchafalaya Basin in the Bayou Teche / New Iberia area. These landowners were relatively wealthy, and were able to purchase this newly opened up land.  By 1850 all the high ridges at the confluence of Pigeon Bayou and Grand River were bought up by the Riggs Family and their 'in laws'.  Objective Evidence by these excerpts from official parish conveyance records. 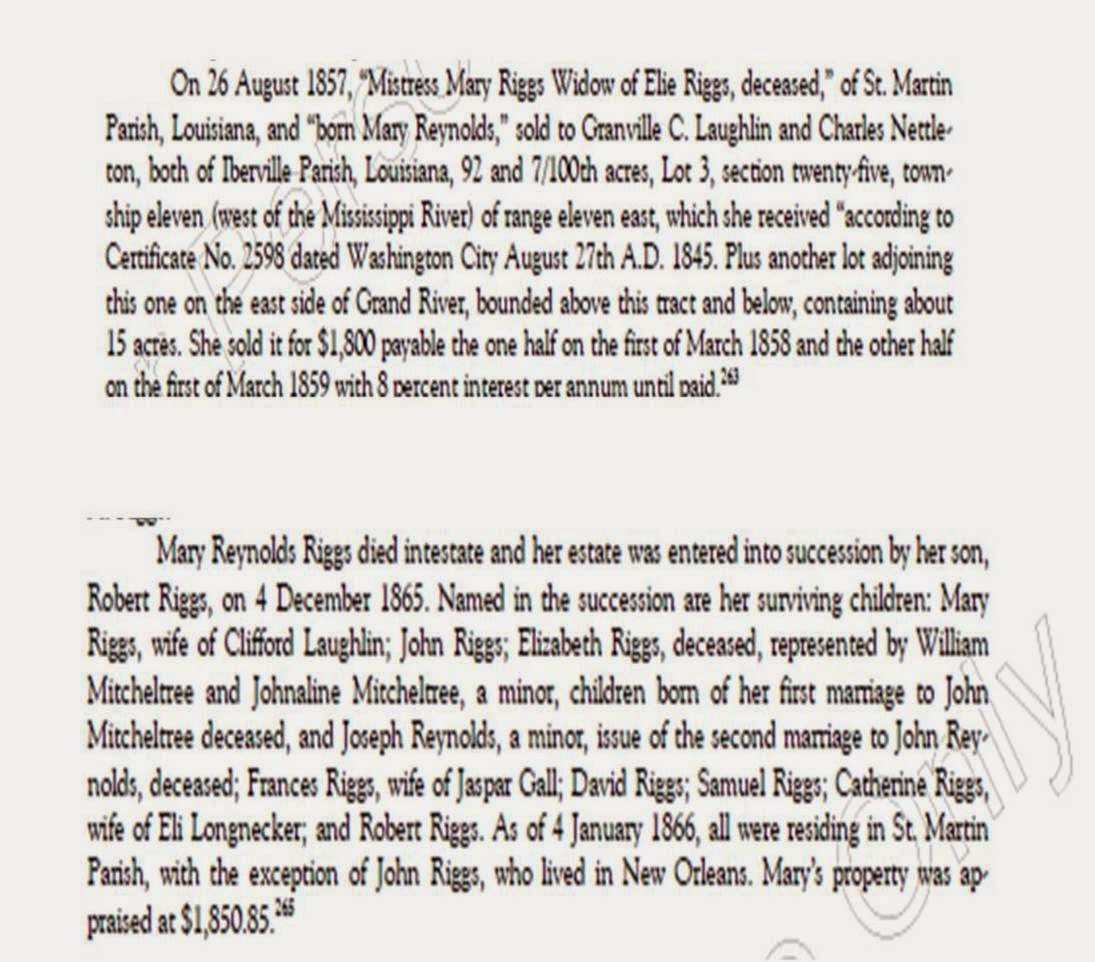 It took 9 years, but The Riggs Family and their ‘in laws’ established sugar plantations and produced sugar by 1860.  The George Mitchelltree family established their plantation by buying his brothers’ property at succession, (John Mitchelltree) in 1850. John Mitcheltree was married to Mary Philomena Riggs, thus he was part of the early Riggs family movement to the area.
Opposite George Mitcheltree and on the east bank of Grand River was the plantation of Laughlin and Nettleton. G.C. Laughlin married Mary Francis Riggs, daughter of Mary Reynolds Riggs. This plantation was established in the late 1840’s as well.
Adjacent to and below Mitcheltree on the west side of Grand River was the plantation of George Bollinger.  Who bought his property from the John Mitchelltree succession as well. Bollinger was from Kentucky as Mitchelltree.
Justillien Michel, the first Cajun at Bayou Pigeon established a plantation, by buying The Jasper Gall plantation, in 1858. Gall was married to Mary Frances Riggs.

The Map below describes the location of  the four sugar plantations at Bayou Pigeon / Grand River and  the ownership in 1859. These folks were not absentee landowners they all moved to Iberville parish and established residences.  This is documented / verified/ corroborated by the 1860 census of Iberville Parish ward 8
. 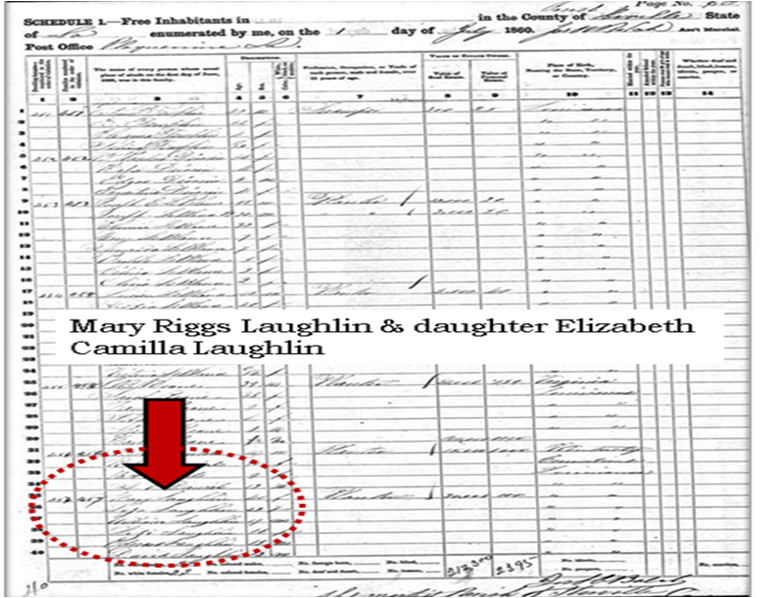 
These were working sugar plantations with cultivated fields, black slaves, Sugar boiling houses, including plantation homes for the owner. As evidenced by the documents below, i.e., the succession of John Mitchelltree upon his death in 1850. Note: The succession clearly describes their was a main  dwelling house on the property. 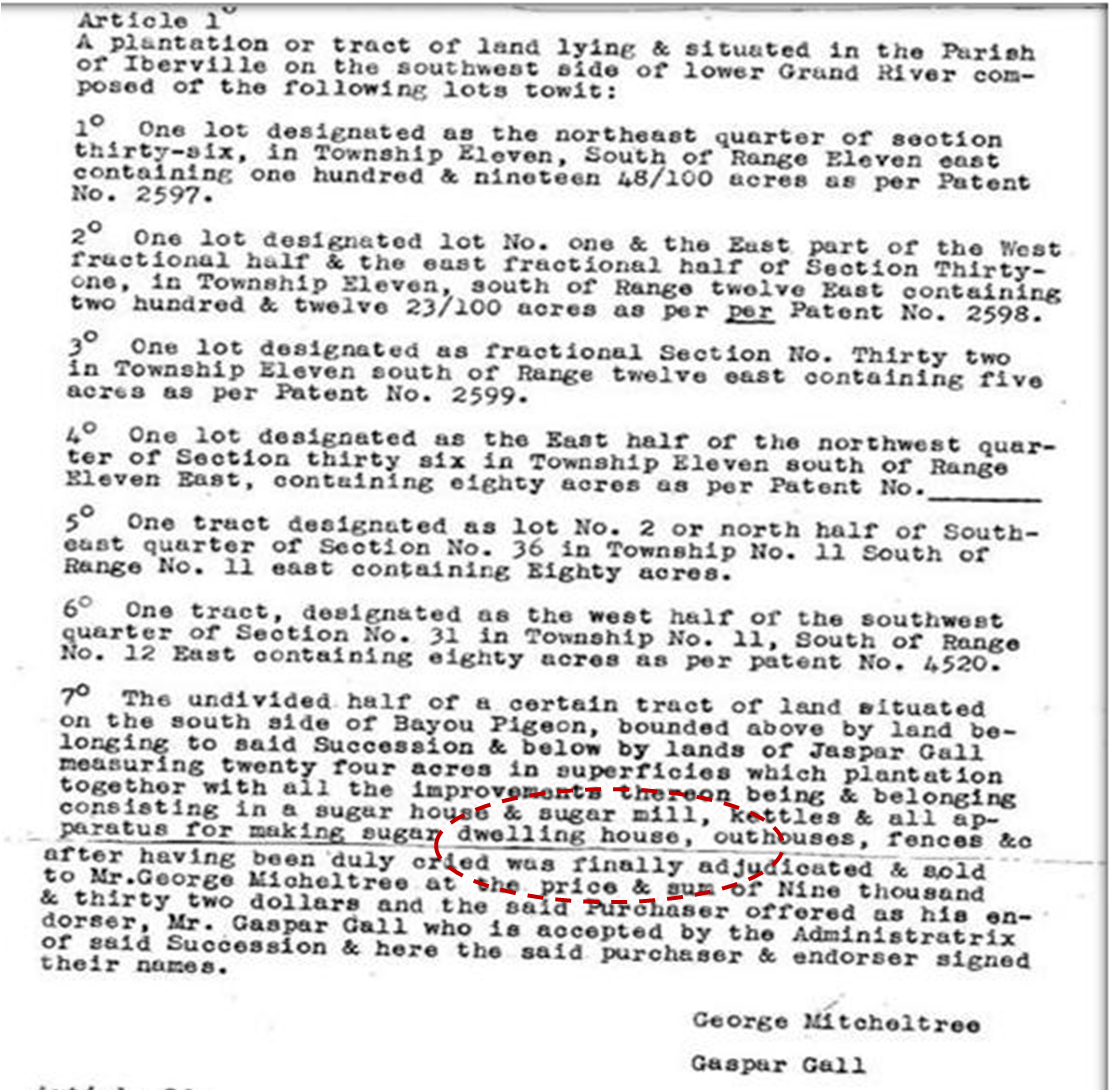 Records from Iberville Parish Clerk of Courts office, document the disposition of the George Mitchelltree plantation after his death.  The map below list the structures on the property when the plantation was sold at Sheriffs sale in 1875 after heirs of George Mitchelltree could not pay the taxes.  The clearly show the location of the main / big house on the property.  This document is truly one the priceless documents in the history of Bayou Pigeon. 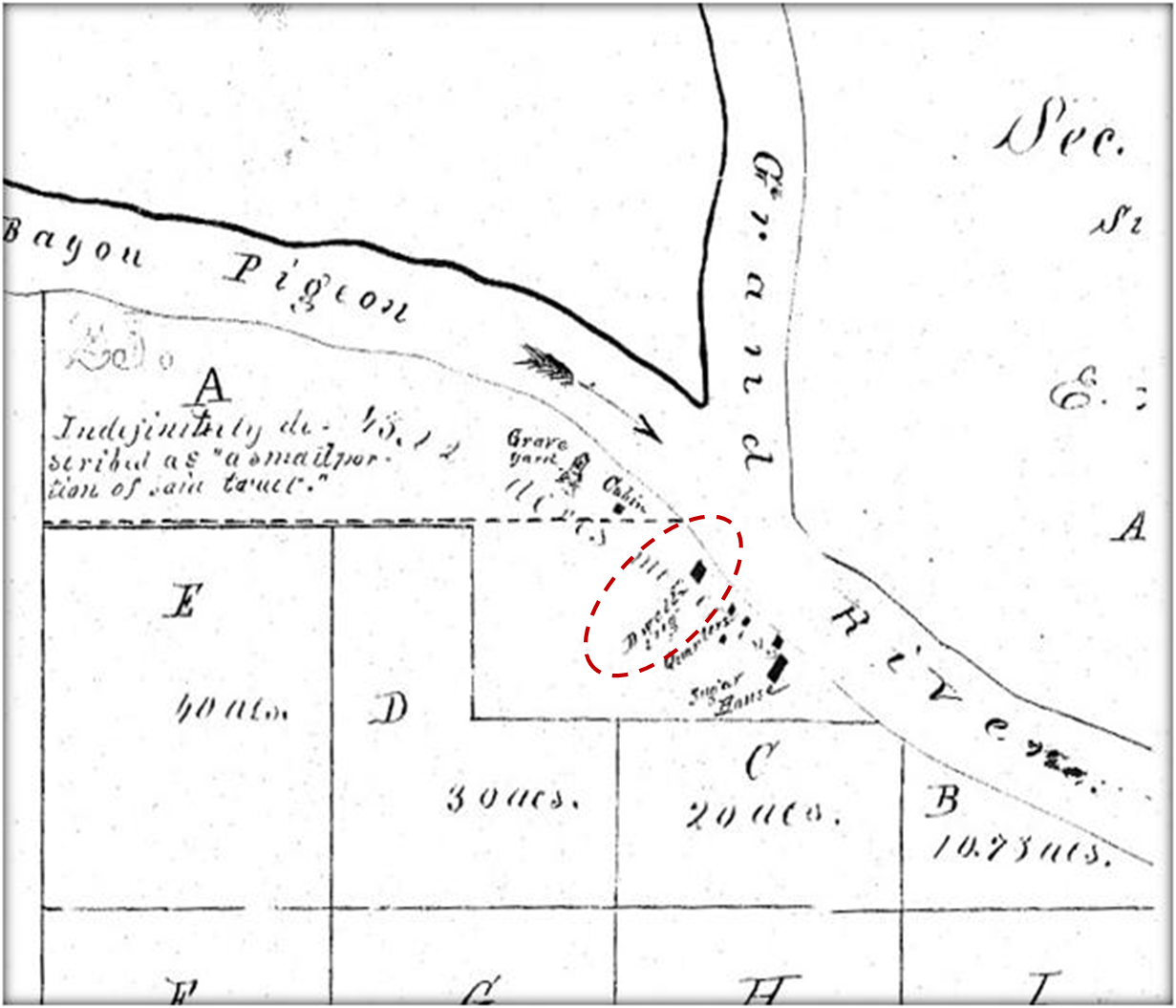 
In 1895 Nestor Michel, lifelong resident of Bayou Pigeon purchased this property from the F.B. Williams Cypress Company.  He moved his family into the big house on the property.  The picture below is the only known picture of the Mitchelltree / Michel house 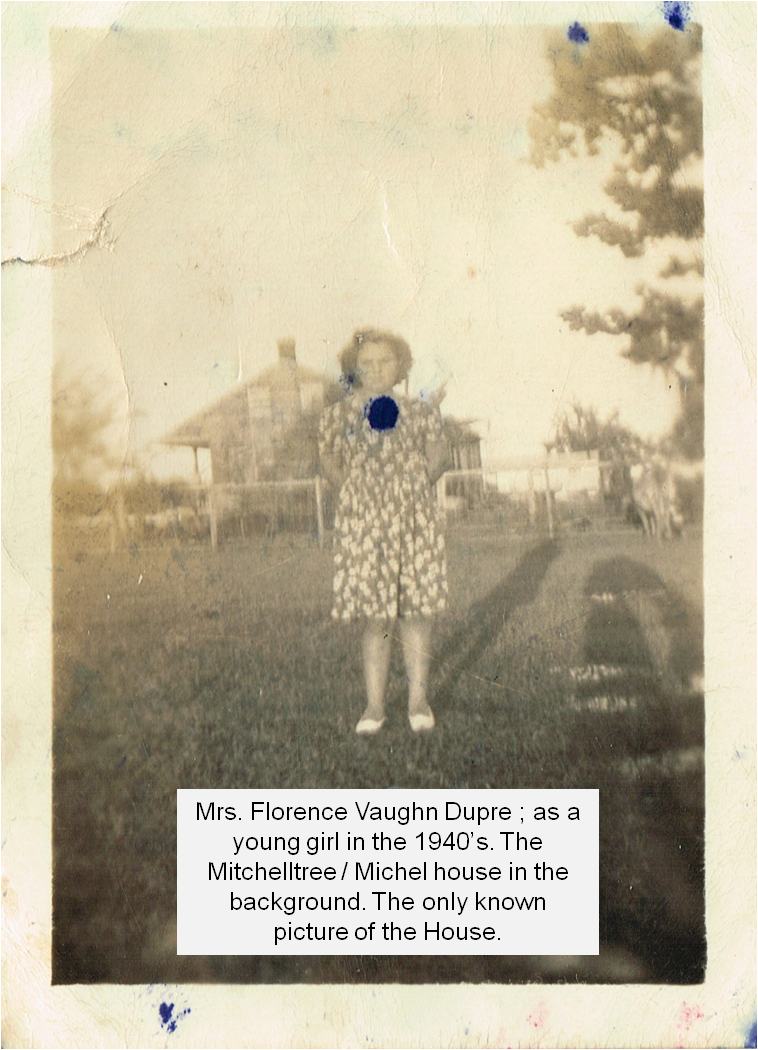 Ms. Clementine Berthelot Michel the second wife of Nestor Michel lived in the house until her death in 1947. Ms. Joyce Percle daughter of Adeia Michel Percle, youngest daughter of Nestor and Clementine and Mr. Dealis Vaughn youngest son of Sidney Vaughn described the interior of the house.  The house was torn down by Sidney Vaughn and Paul Michel in 1949.  The sketch below provides the layout of the house as they remember it in 19 48   / 1950 time frame. The house would have approximately 100 years old.  I am not sure if the origin of the house was known at the time the old house was torn down. 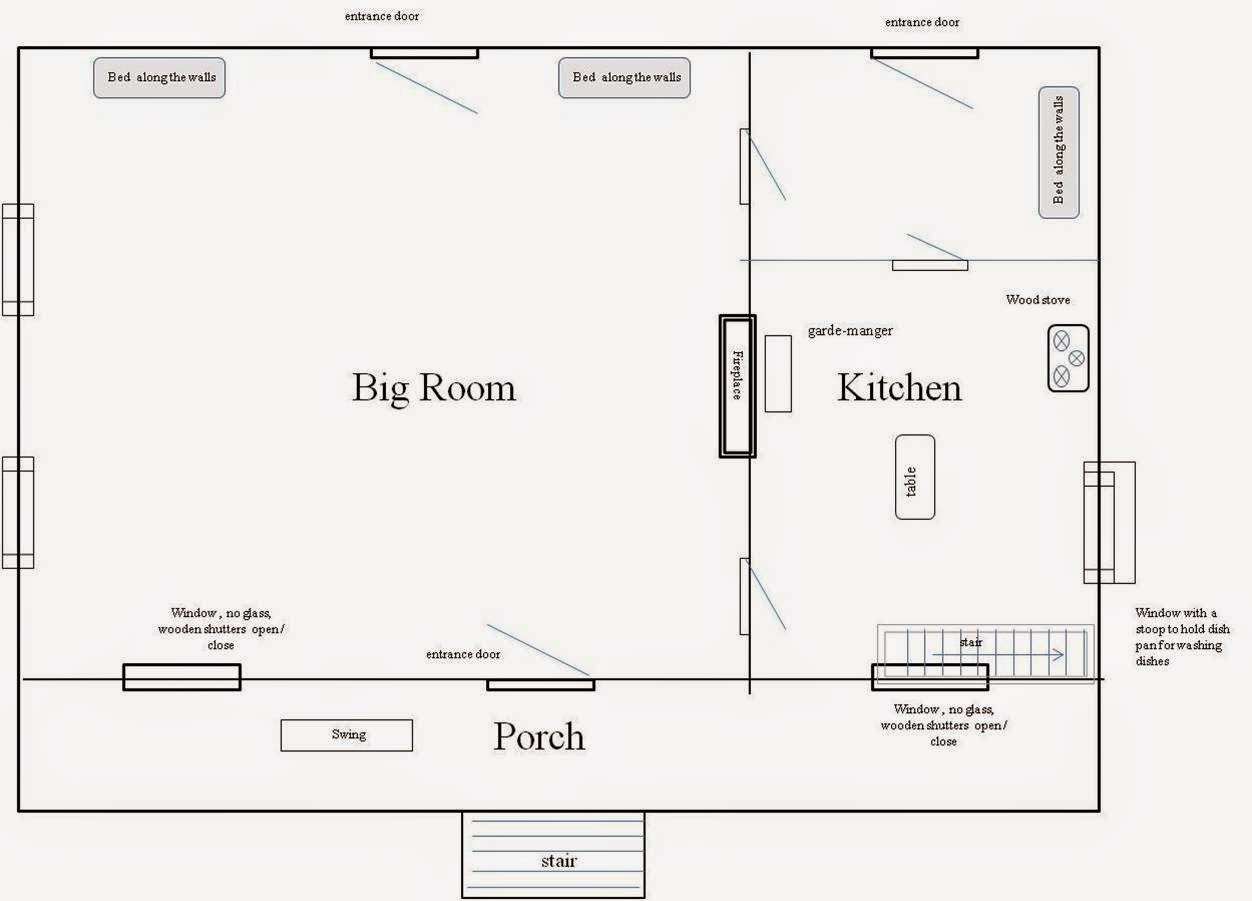 
We / I did not connect the dots on this one prior to the printing of the Bicentennial edition, i.e., The Laughlin _Nettleton / Berthelot Family connection.   Granville Clifford Laughlin lived with his wife Mary Riggs Laughlin on their Down home plantation on east side of Grand River at its confluence with Lower Grand River. 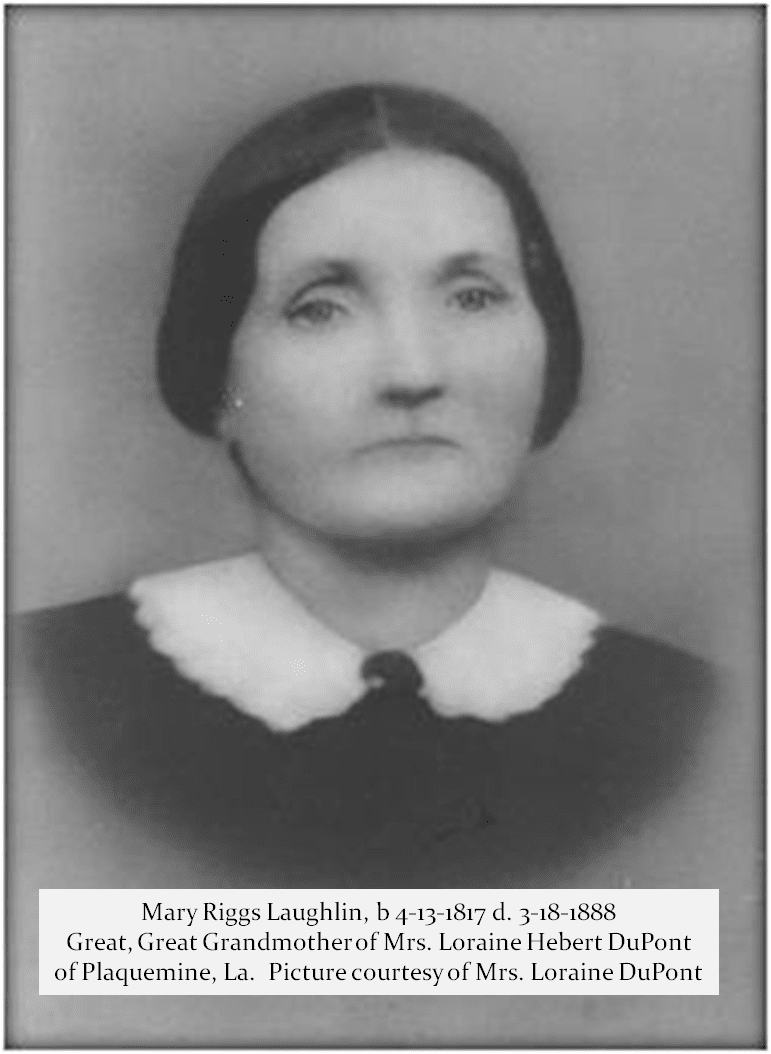 A young Lawyer from Plaquemine was hired to do the succession of Granville.  He was Thomas E. Grace, in doing the succession he fell in love with Granville’s and Mary's  daughter, Elizabeth Camilla Laughlin. He married her in 1860 at the Down Home plantation. 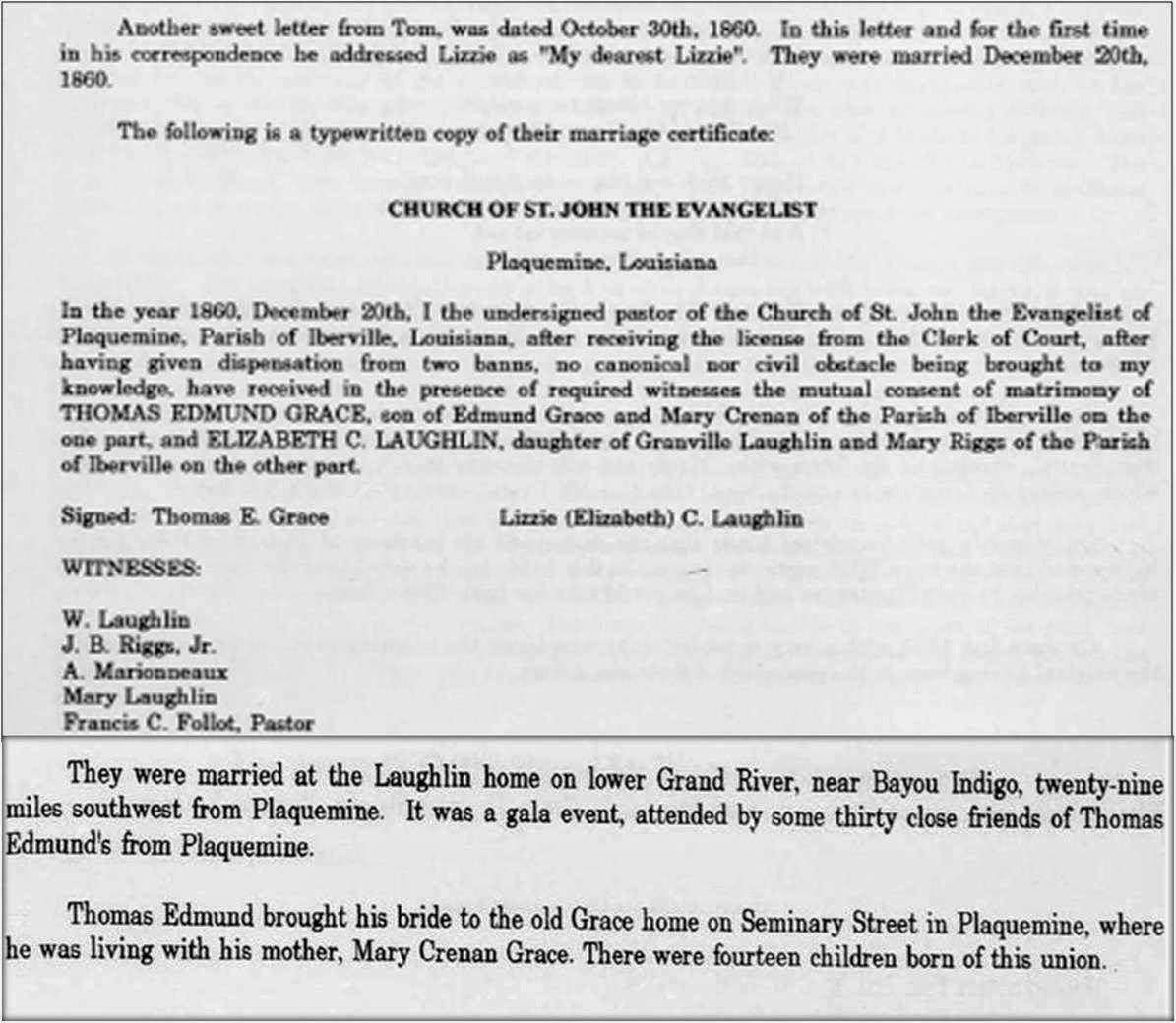 What happened to the Down home Plantation house that Lizzie Laughlin was married in? 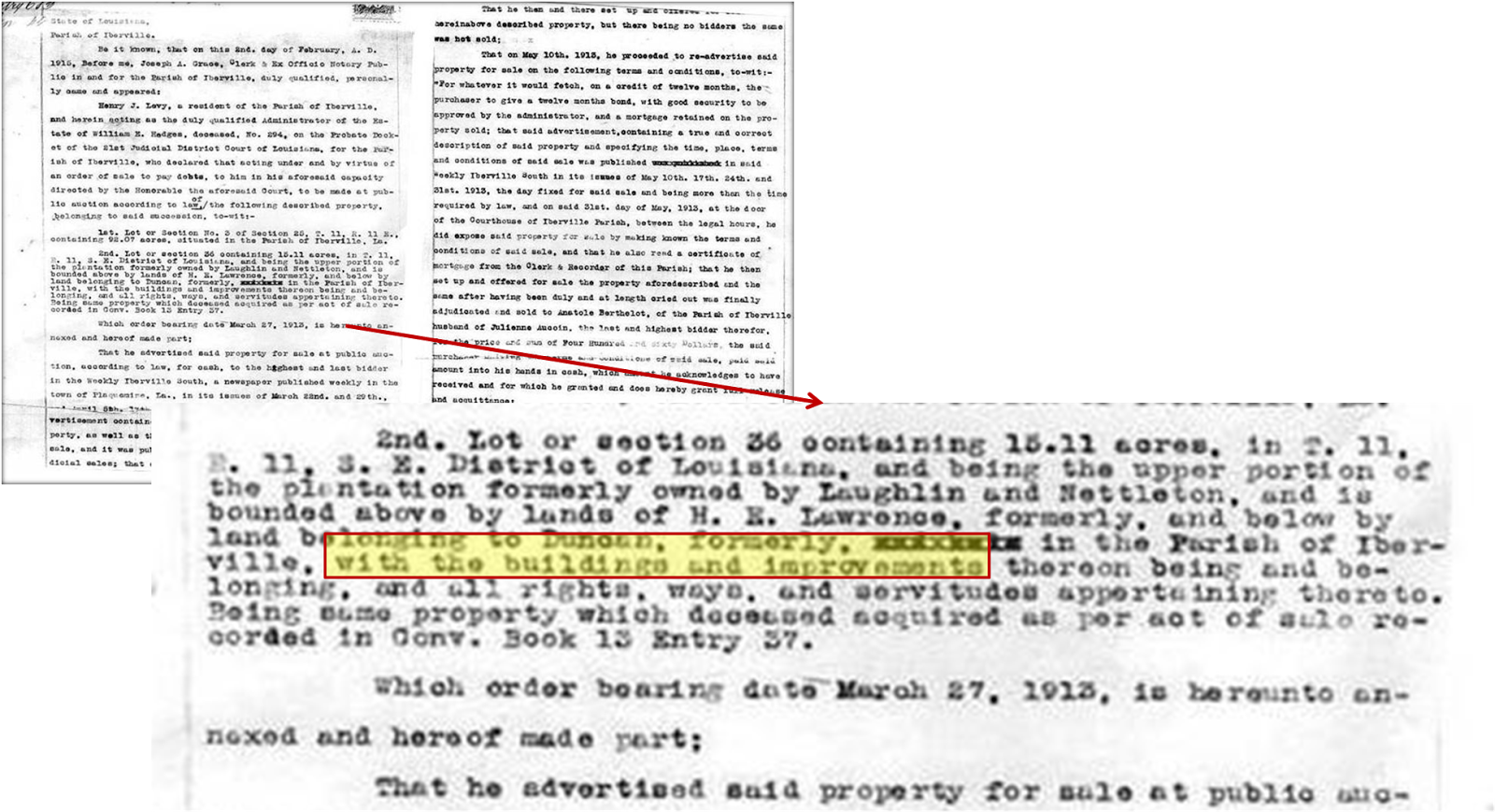 In 1915 - Anatole Berthelot of Bayou Pigeon purchased via Sheriffs sale the former property of William Hedges for $400.00. Anatole was encouraged into buying the property by Nestor Michel to buy after it had been available for a number of years.  The purchased included all the buildings and other improvements on the property.  It is safe to assume that one the buildings was the Down Home Big House. 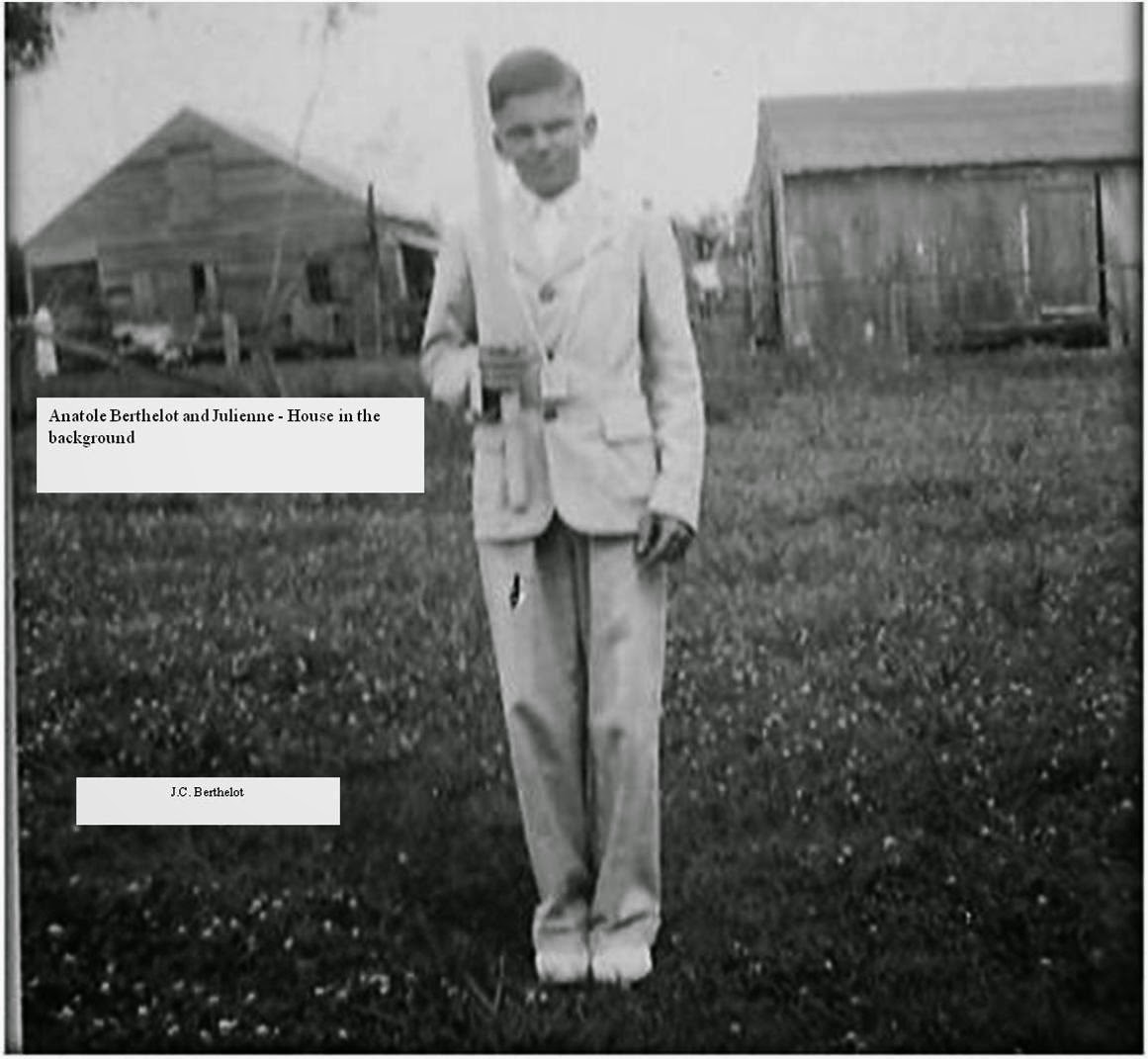 In the Background, is one of only two known pictures of the Berthelot house, circa 1930’s.  Grandma Julienne lived in the house until death. Look at it for a while… you are looking at the Laughlin down Home Plantation home built in the 1850’s.  The 1913 conveyance where Anatole Berthelot bought this property insinuates that there was more than one building. Anatole‘s son Augustine, lived in a similar looking house a short distance away. Several of our reliable sources of information testified that the Augustine Berthelot house looked just like the Anatole Berthelot house. We (the authors assume this could be a second plantation dwelling. Where Mr. Nettleton, part owner and overseer of “Down Home” plantation lived. But we cannot find objective evidence to prove that, e.g., a picture. The Anatole / Grandma Julienne house was torn down by Clement Landry the son in law of Anatole Berthelot, in the 1950’s. 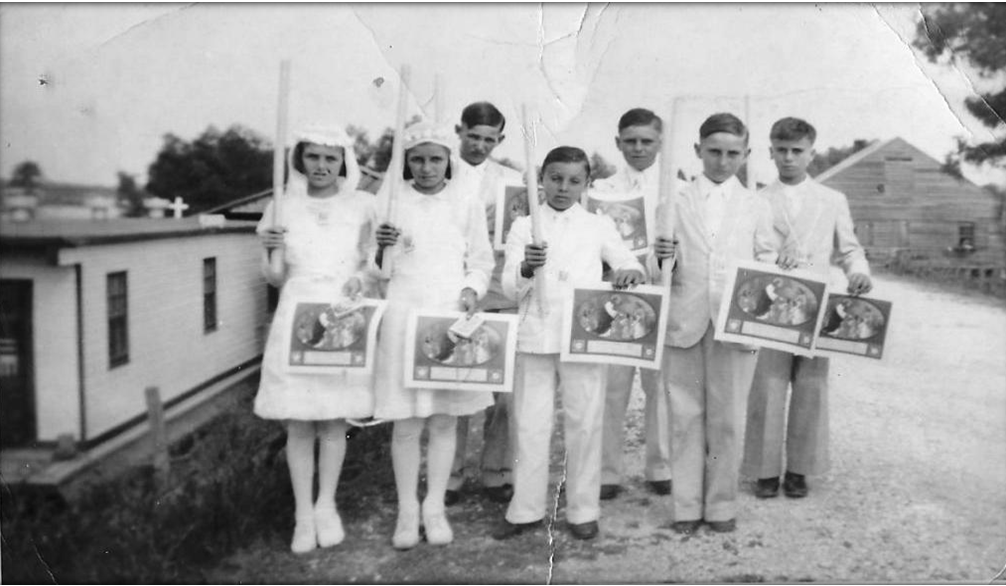 In the right background, is the only other known picture showing some of the Laughlin /
Berthelot house, ie.,  Down  Home Plantation. Note How close to the road and how high the back is off the ground.  Suggesting that before the Borrow canal, the house was raised  quite high  off the ground.

GPS / location of the old Laughlin  Down Home Plantation House Sometime after that Clebert Frioux, the son in law of Anatole Berthelot purchased part of the old Bollinger plantation, including the house on the property.  Many folks  testified that Clebert Frioux lived in a plantation looking house, facing the Grand  River, just  to name a few,  they were Shirley Mae Settoon, J.C. Berthelot,  Claude Landry, Eugene  Vaughn.

Correspondence from the  Laughlin / Riggs family corroborates the  Bollinger plantation. 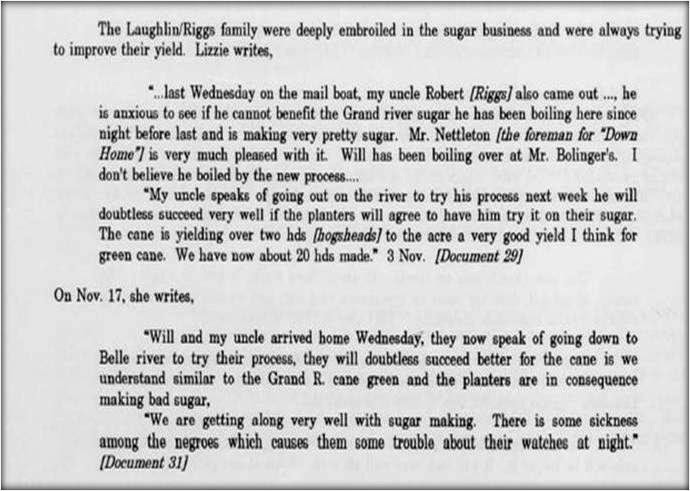 The Bollinger home was located between the former homes of C.I. and Bernice Clement and the  Ernest Hedges home by verbal interviews from the folks mentioned above. Until recently we thought that finding a picture or proof of this Plantation home at Bayou Pigeon was lost to history.

However, Jaime Morales, spouse of Quentin Morales, new commercial fishing family at bayou Pigeon, made me aware of video from the 1940’s That had a short clip of Bayou Pigeon.  The  video was done by LA. Baptist College.  This video is another priceless peice of history. After reviewing the video we managed to get the following screen capture from the video.

The man and woman on the right, standing on the porch of the houseboat are Leo Landry, and his first wife, Laura LeBlanc. 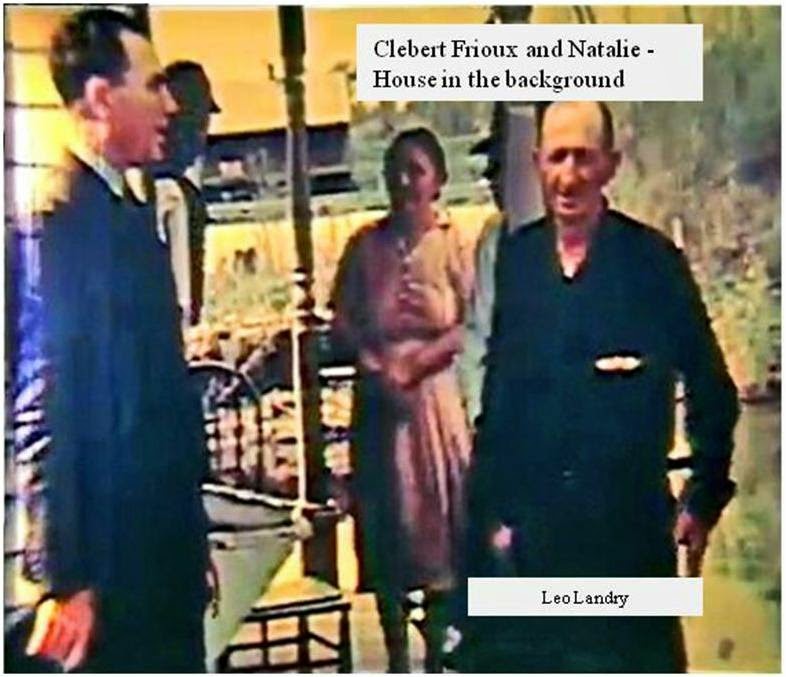 By the grace of God we have found a picture of the Bollinger plantation house.

In conclusion, you might ask why we are doing this. If we don’t document our history it will surely disappear.

Nestor Michel, more than likely knew he was living in the old George Mitchelltree home, but obviously he did not pass that information down, if he did it lasted one generation at best.  We will never know if Anatole Berthelot,  knew the origin of the residence he purchased. We know that none of the second generation Berthelots descendants were aware.  Again, the same for Clebert Frioux and his descendants. By connecting these dots of history we are ensuring / perpetuating the continuing existence of Cajun Bayou Pigeon culture. People find it interesting to know how the people / their descendants lived their day to day lives.

The Ghosts of the Past Speak to All Who Will Listen"

Posted by Chachie of the Atchafalaya at 4:40 PM