U.S. Census  records  are  included in the Bayou Pigeon book, but stop at 1930. That is, because when the Bayou Pigeon book was published the  US Census data was only public up to 1930.  Census records are created every decade by the federal government in order to determine the number of delegates each state may send to the U S  Congress. Due to the sensitive nature of census information, the U.S. adopted a 72-year privacy rule (other countries use a 100-year restriction).

The 1940 U.S. Federal Census was conducted using an official  census date of April 1, 1940. Therefore all census data specific to an individual was restricted until April 1, 2012.  Once the 72-year privacy restriction is met, population schedules are released to the National Archives and Records Administration.

The 1940 US census has been available for  about 2 years now and I have spent some time researching it.

I believe the 1940 census is important  to Bayou Pigeon, because in 1940 Pigeon was a pure unadulterated Cajun  Fishing community, not influenced by outsiders and modern society. The cultural / folklife traditions  that the authors of the Bayou Pigeon Book are trying to document and preserve  were  at their peak.  After WWII  the French / Cajun Culture & folklife began  to be Americanized

1940 census is also personal to me  because my wife’s paternal  and maternal side of her family ( the Solar's 1933_ Gaudet's 1936) came  to Bayou Pigeon.  And this  is the first official recording  of their move to Pigeon and I wanted to document that..

A word about Cajun names in the Census records;


I had to search awhile  to find  the  Solar’s in the actual census records, because their names were misspelled.  I have determined  that was quite  common  at  / for the Bayou Pigeon census.  Not that the names  from Pigeon, should be that hard to spell, but because of our Cajun French language and the way pure Cajuns pronounce names, they were frequently misunderstood and therefore misspelled by  the census takers who did  not speak French and thus did not understand what  the people were saying.  For example  Solar,  you would think   that should be easy… but in the old  days when my Mother in  Law  would pronounce it;  it sounded like ‘So_laa” , which I suppose  would  sound like  ‘Saurage’  to an Anglo, which was the way it was spelled in the 1940 census record.

Another example, Mr. Felician Berthelot,  the English version would be Felix. But that is not close to how  the old  folks at Pigeon say it  'fa les e ain.'

If you have an interest , I have tried to provide this data in high resolution, so you can enlarge  and read the actual index page. I know a lot of folks may not be interested  if they cannot read the names easy.

But to me  looking at the actual census index page gives the reader a real sense… yes that is my Grandparents  and Parents.  They are gone, but I feel like I can still touch them !


The census workers worked there way  down Hwy 75  from Plaquemine house to house, so the order of the families  that were recorded does provide  some indication of who lived next to who and where eg., it is easy to determine someone who lived at  Indigo Bayou… because well known,   several  families were known to live there  and only there, ie., the Blanchard's,  almost the entire family lived within eyesight of each other at Indigo,  thus if you lived close to the Blanchard's you must have  lived at  Indigo at one time..


Example, Diane’s (my wife) maternal side of the family, The Gaudet’s are listed right next to the Blanchard's.  Corroborating that the Gaudet’s lived at Indigo  at one time. Whereas most people remember them only living above the current Grand River_/ Pigeon bridge, where the Gaudet store  was located.

If you have access to Ancestry.com and want to look  up the information yourself.The actual census records are under...1940_ LA. -Iberville Parish _Police Jury Ward 8_ outside Plaquemine town_ Crescent  Enumeration District 24-21_ pages  #49  - 60

The 1940 US Census recorded approximately 100 Heads of Household and 390 souls at Bayou Pigeon.

Can any one help explain  and / or verify where they might have been located  by these numbers… they are 6 numbers apart. 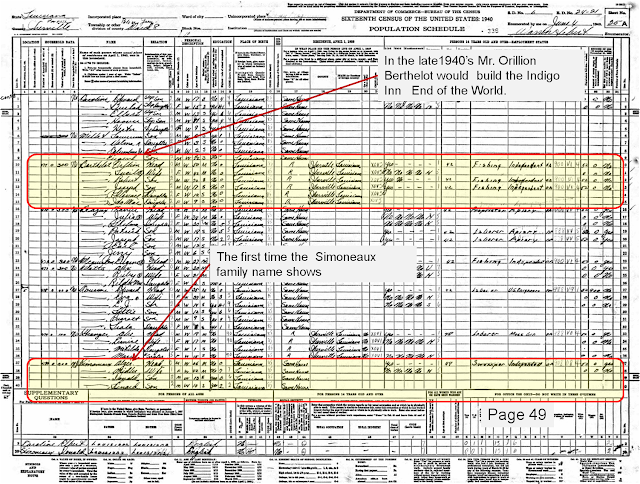 
On Page 50, I pick up names of  Bayou Pigeon I can recognize,  Mr. Claiborne Landry, in house # 487.  Now assume  that Mr. Claiborne was living at his  farm  at Choctaw and Grand River.   That would put Mr. Orillion Berthelot and Alger Simoneaux  above  that residence, since they were at 374 and  480 .

Earnest Hebert at #488.  I am told  That Earnest Hebert  and family lived  just above where the current Hwy 75 Bayou Pigeon fire station is located now.

Note  all the people from line 44 to 72, have occupations  other than fishing.  I wonder where this group  was  actually located.  Anyone got  any clues ? I think they were located between the  Bayou Sorrel Locks and Choctaw Bayou. 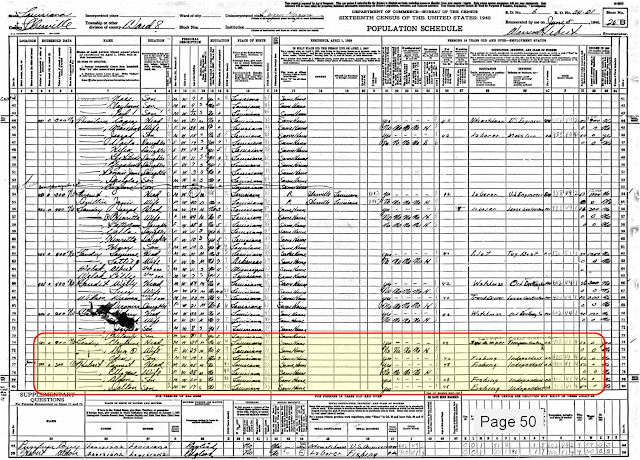 On Page 51, all recognizable Bayou Pigeon Families, most long time residents can recognize.  The order seems to match where people remembering everyone living.

However, there is one  family with surname of  Case.  Is this  family related to Case  family  we know of in Plaquemine? 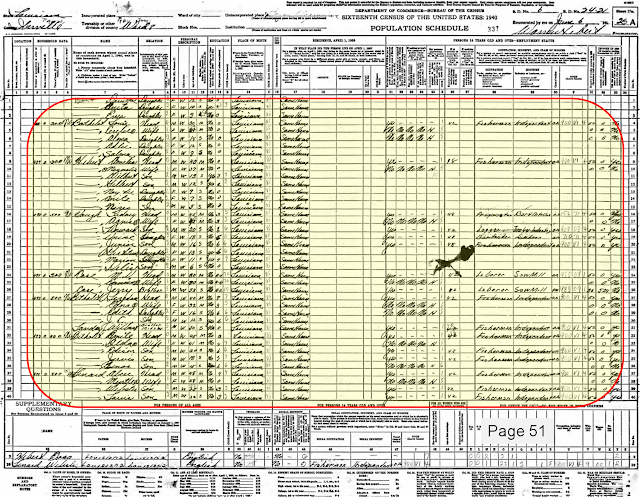 
Note  Line 42, the first entry is actually Mr. Clement Landry, the Census  taker recorded it Claymore Landry.  The Pigeon pronunciation s would have sounded 'Clay_Mon' to an  Anglo.The census taker at the time was  a Mr Warren Hebert from Plaquemine.  It seems to me with a name like Hebert, he would have got ' Clement' right.  L.O.L. 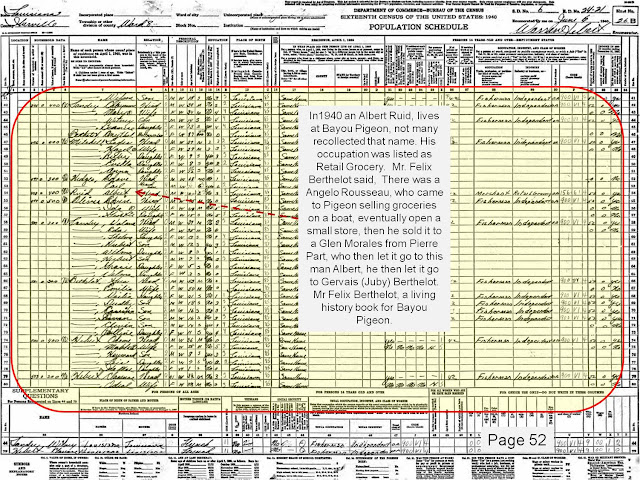 
On Page 53, all recognizable Bayou Pigeon Families. The order seems to match where people remembering everyone living.  On the very last entry the census recorder , Mr. Warren Hebert was confused he listed Clement Landry  a second time, what / who he really meant was Leo Landry. 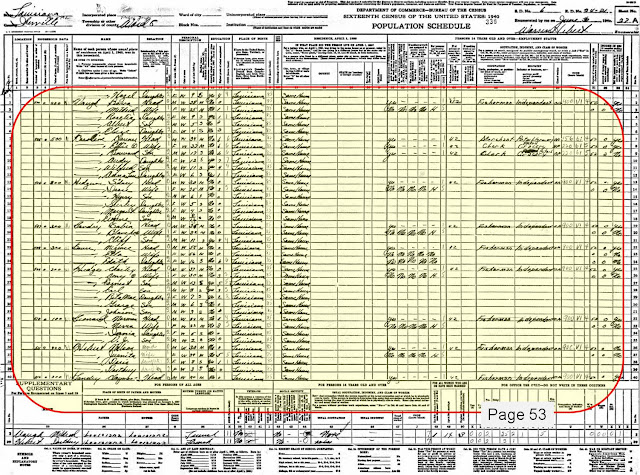 
On Page 54, all recognizable Bayou Pigeon Families. The order seems to match where people remembering everyone living. The Census taker must have left the Pigeon area and went back to Plaquemine or White Castle, the last two names are Black people. 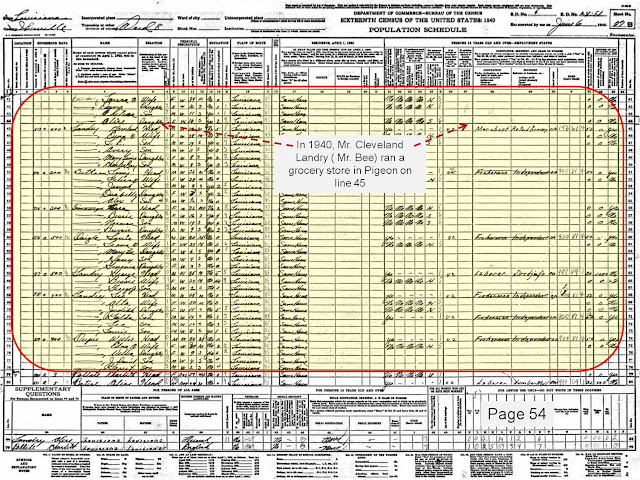 
Pages 55 - 58 of the census is of another area, the Census  recorder returns to the Bayou Pigeon part of the 1940 census picks back up on page 58.  Bayou Pigeon Families start again on line 49.

The last line# 80 we go toward Indigo Bayou…  How do i know that?  Because that’s the listing is Mr. Archie Settoon... everyone knows he lived half way from current bridge and Indigo Bayou. You see… you can connects the dots…it all makes sense 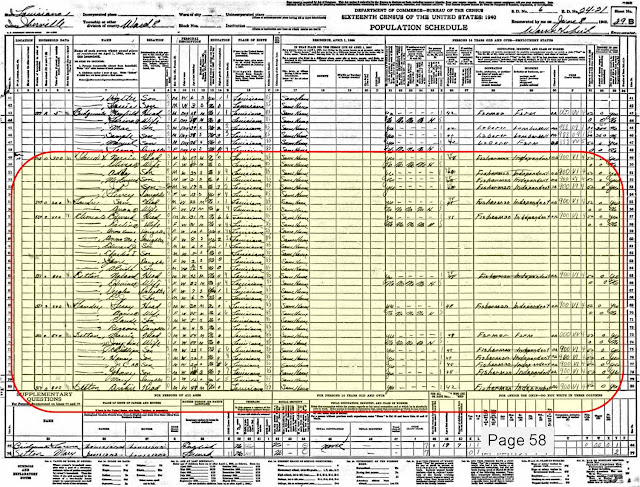 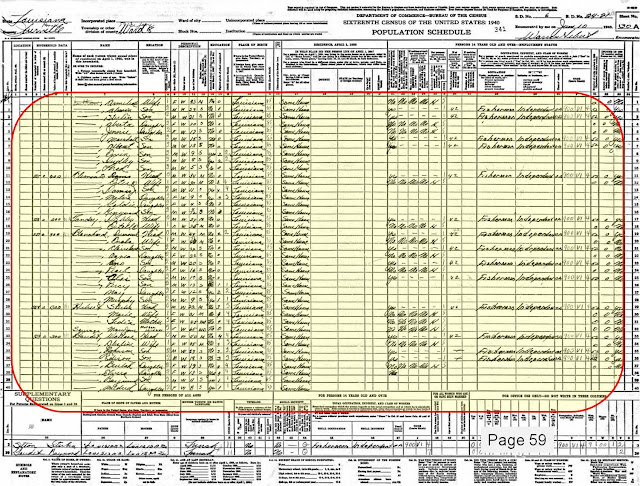 
On Page 60, we are still the Indigo Bayou area, eg., the first name on the list is a carry over from page 59 Ms. Shirley Gaudet, who recently passed this year. She was the pillar of the Gaudet store. This is where the Solar family name is misspelled, line 42. It is Solar, not Saurage, how could the census taker mess up that bad, maybe old Man Casamire and his wife Lucy did not talk any English.
The census taker must have left Indigo Bayou and went to across Grand river at the confluence with little Bayou Pigeon. The last two names on the page are Devillier Daigle and Evelyn Vaughn, who were know to live near Ms. Clementine Michel. 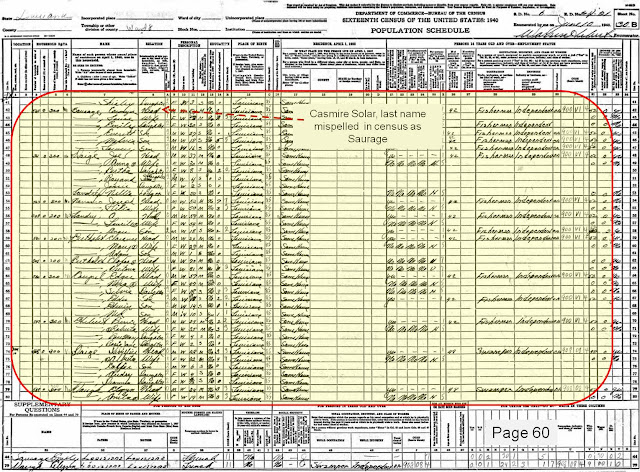 
On Page 61, the census taker is still on the west side Grand River going in order toward the current Bayou Pigeon bridge. By recognizing the sequence of recording you can connect the dots on where people lived. Line # 26 is Mr. Felix Berthelot 14 years old. 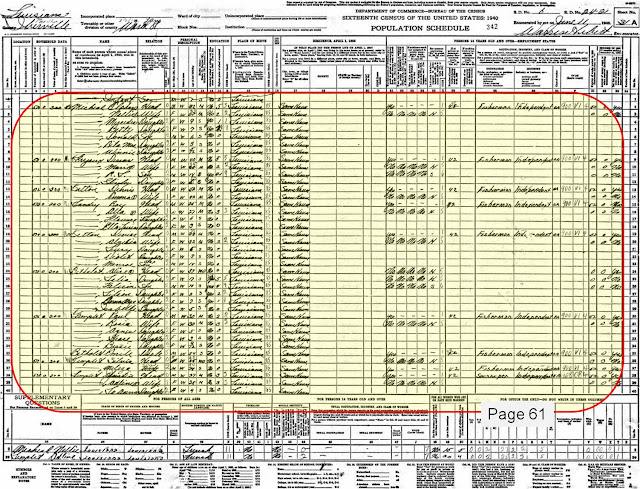 On Page 62, The Bayou Pigeon Census ends. The census taker is still on the west side Grand River, and he butchers more names.  I am not quite sure of who some of the names are.  If anyone can figure our  who is talking about on lines 57 to 60, please let me know.

The last name on that page must not be from Pigeon, because the occupation is listed as a farmer. 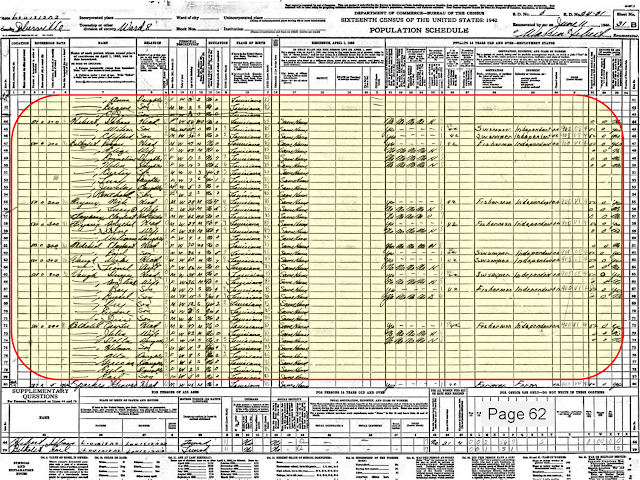 Posted by Chachie of the Atchafalaya at 11:08 PM