What's in a Door?

While the history of doors may seem trivial. It is not, however, uninteresting.

For instance, how large was the door on Noah’s Ark? Okay, we really don’t know. But if we did know, would we possibly translate the variable measure of a cubit?

Panel doors, with a classic pattern of square / rectangle panels were/are one of the most common type of doors seen in upscale classic homes today.

What's in a Door?

History buffs and local historians are always excited about learning the hidden history of things, places, and or events. 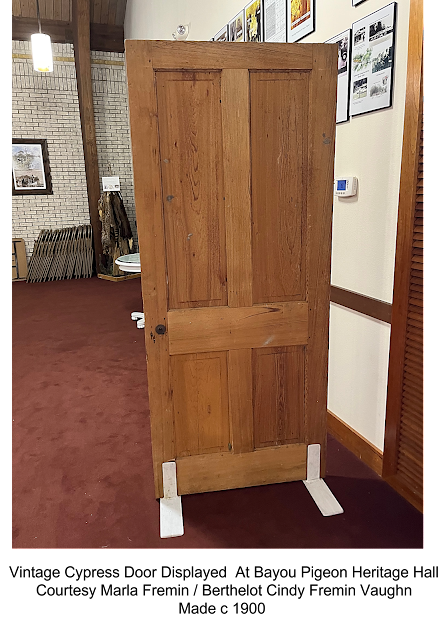 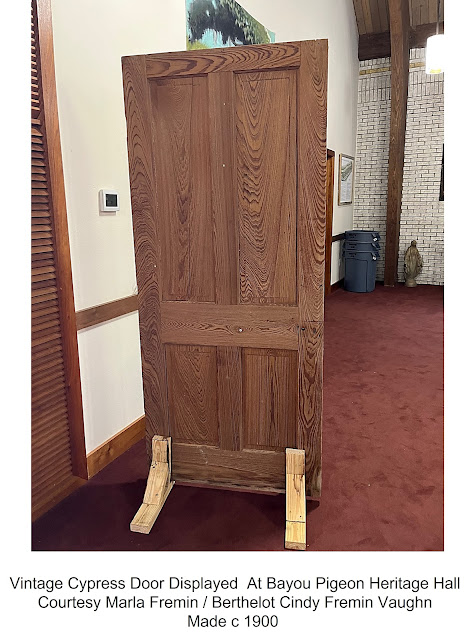 When the Fremin family of White Castle purchased the land where they built their Diner, they purchased the old  house  that was on the property.

They had it torn down and salvaged the old vintage cypress doors that were in the house.

Mr. Leonce Soniat was a large landowner in the White Castle area in the late 1800's and owned what is now Ceder Grove Plantation which touches the west boundry of the Town of White Castle.

When the town was incorporated in 1892, he purchased several large plots in what is now the Town of White Castle and one of those plots was where the old Diner was located in White Castle.

He built and owned several homes in that neighborhood.

The house originally belonged to Paul Blanchard a rather wealthy businessman who was co-owner of the first movie house in WC with Eddie Barbay.

The house was later sold to Mr. Pete Gauthier who owned the second movie house in WC located on the north side of the RR track in WC.

He rented the house in later years and one of the long-time renters was Mr. E. J. Burleigh a county agent who lived in WC.

Researching the history of the house and the doors with Mr. Fry Hymel, talking with some of the old timers from the area, we can be sure the original house was built in the very early 1900's.

While it is probably lost to history where Mr. Soniat got the cypress lumber to make cypress doors in the house he built.

It is almost certain that the doors were made from cypress produced and milled at the local White Castle Lumber and Shingle Co. Mill the Cypress Queen.

The White Castle L&S Co. shut down in approximately 1915. 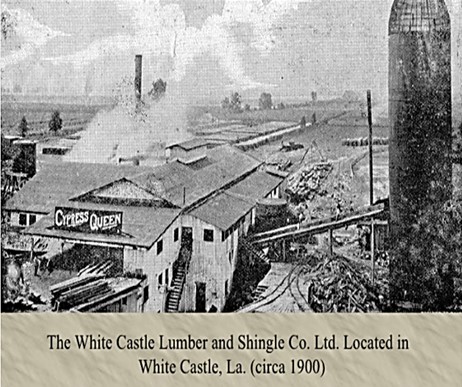 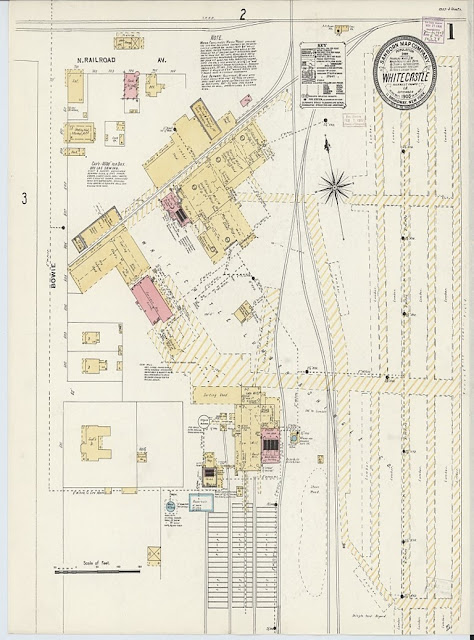 Layout and Location of the White Castle L& S Co.

Just ask someone from White Castle, LA., under 50 about the White Castle Lumber & Shingle Co. and / or the Lake Natchez railroad.

The history of the White Castle Lumber & Shingle Co. is a great example.  All firsthand informants are no longer alive to preserve such a historic period for Iberville Parish, White Castle, LA. and the Atchafalaya Basin.

The Sawmill at White Castle

The Texas & Pacific railroad at White Castle runs parallel to the Mississippi River from the south windows of a northbound train is seen the plant. The office of the company is close to the railway track.

The sawmill was the most prominent building of the plant, and it stood a slight degree to the southwest, but on a line almost due north and south. Over the north end of the sawmill are the large letters which hark one back to the days of William Cameron. They spell out in no uncertain terms "Cypress Queen."

This building was irregular in shape, with boiler house and engine room on the cast side. The building was 173 feet and 5 inches over all in length and had a breadth of 103 feet 8 inches.

What's in A Door! A little piece of White Castle history, that' all.

Special thanks to Fremin Family for preserving these pieces of Heritage / History.

Stay tuned there will be a presentation about The White Castle Lumber Co. and Lake Natchez railroad this Oct. 2022 during Atchafalaya month celebrations.

Posted by Chachie of the Atchafalaya at 12:33 PM