The Islenos of Bayou Pigeon

The term "Isleños", refers to people of Canary Island  descent that settled in South Louisiana.

This  blog posting  is the result of being invited to speak at the May meeting of the ‘Canary Islanders Heritage Society of Louisiana.  In preparing for this  presentation , I purchased a  copy of a newly released book, ‘The  Isleños of Pierre Part’, by Chad  Leblanc. 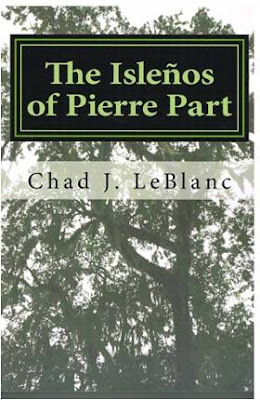 I knew a little of the history of the Isleños  in  the Bayou Lafourche  corridor.  Since most of the people of Bayou Pigeon hail  from Pierre Part, I was  looking  for Isleños connections  to Bayou Pigeon so as to make a  better connection to my  next audience.

Lo and behold, did I find  connections…not the least of which, connections  to my wife of 50 years, Diane Solar.  I knew instantly that this would be a very interesting topic  for this blog.

The Isleños hailed from the Canary Islands, an archipelago south of Spain. At the time of the American Revolution, when Spain held dominion over Louisiana, she developed a major plan to populate the new province.


After Spain acquired Louisiana in 1762, it recognized the need to populate the territory. It looked to the Canary Islands for 700 recruits.  It tried to get married recruits so that they could not only defend the area, but also populate it.  The recruits were required to be from 17 to 36 years old, healthy, without vices, and at least 5' 1/2" tall.  Butchers, gypsies, mulattoes, and executioners were not permitted to sign up.  Though it wasn't in a written agreement, they understand that they were going to stay in Louisiana permanently.  The recruits were to receive 45 reales upon signing up and 45 more upon arrival in New Orleans.  They also got 1/2 peso a day while waiting to leave.  People were also paid for finding these recruits; in fact, they were paid according to the height of the recruits.  The payment was: 15 reales if at least 5' 1/2", 30 reales if at least 5' 2", and 45 reales if at least 5' 3


Five of the islands sent recruits to Louisiana: Tenerife (about 45%), Gran Canaria (almost 40%), Gomera, La Palma, and Lanzarote. The 700 recruits brought their families, bringing the total number of immigrants to 2,373.  The following ships brought the Islenos to Louisiana;


Spain ensured the Canary Islanders, a safe passage across the Atlantic. In Louisiana, they would receive land, farm tools, a house, and a monthly stipend and that Spain's Louisiana Governor Bernardo de Galvez would determine a suitable location for their settlement.
Govenor Galvez planned there settlement strategically: 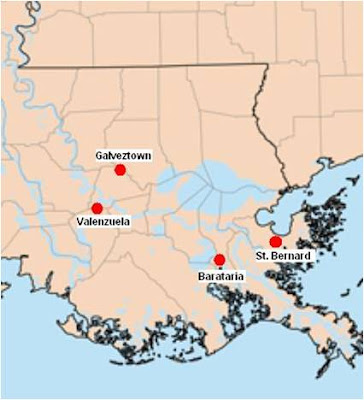 He positioned the newcomers at four strategic sites surrounding the port of New Orleans to defend Spain's Gulf trade routes from the English. Moving counter-clockwise around the city, the villages were Galveztown ( Amite) , Valenzuela (Donaldsonville), Barataria , and St. Bernard Village.


Galvez, intended for the Canary islanders to sustain themselves as small farmers.

The location of Valenzuela  would play a crucial role in the destiny  of settlement. 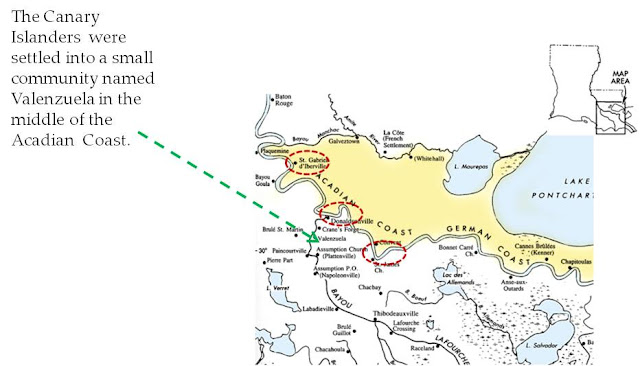 The first  Acadians  had arrived in  South Louisiana in 1764 and people  well know the  story of the  Acadians. The  Acadians  were themselves small farmers, ‘Petite  Habitants’ in Cajun french.


A Lieut. St. Maxent was appointed as commandant of Valenzuela and went there early to prepare for the arrival of the first Islenos in March of 1779.  There were already  significant number of Acadians in the Lafourche area, living  around Valenzuela, you have to question  that maybe this  was done on purpose.


A man named  Judice, was the commandant of the Acadians, he owned the land at the SW corner of the juncture of Bayou Lafourche and the Mississippi River.  This caused a bit of conflict, because Maxent was military commander of Valenzuela, but Judice was actually in charge over civil matters.


St. Maxent brought the first settlers a few miles down the bayou  away  from Commandant Judice.  He settled them on the left bank.  More of the recruits and their families arrived later.  Ten houses had been build by May.  Their houses were about 15' x 30' with 2 doors, 3 windows. and a chimney. A census in 1784 found 174 people at Valenzuela, 154 of which were Islenos.


A large group of  Acadian immigrants arrived on the seven ships in 1785, at that time the population of the Lafourche Interior was about 353.   When the  over 800 new Acadians arrived  in the  area, they  spread out.  The  Acadians  became  the  largest and most dominate group of immigrants on the  west  side of the Mississippi river.

Coalescence of  Acadians  and Isleños:

In addition  to both being set up to be  small farmers, the Islenos and the Acadians were Catholic  these two things easily facilitated  intermarriage . Church  and  Civil records  document  that coalescence  started  almost immediately. The Canary Islanders  were quickly  blended  into the  Acadian population. The French / Acadian language  and culture became  the  dominate culture / language of the area versus the  Spanish influence.


It is recognized by Louisiana history experts  and known by many Louisianans that  the terms  Acadian and  Cajun are used interchangeable today., However they are not the  same people . Officially the  Acadians are the people  who lived in the French  colony of  Acadia in Nova  Scotia.  The  early  Acadians   that made it to Louisiana called themselves ‘Les Cadiens” . The English  speakers  in the area could not pronounce ‘les cadiens’ the word  was   quickly anglicized to ca_jun.

With  so many more Acadians in the area, the Canary  Islanders were quickly integrated and their  culture was overwhelmed by the ‘Les Cadiens'. The French  language became the  dominant  language of  the intermingled marriages.

That is why , today many family sur names  associated with Cajuns are not  of French origin but have incorporated through intermarriage.  For example in the case of Bayou Pigeon, surnames, like  Solar, Perera, and Rivero were Spanish  Canary Islanders.  There are many other examples as  well.

How did the  Cajuns end up in the Pierre Part – Lake Verrett area.

As the plantation economy came into its own after the  Louisiana  Purchase in 1803 and  Louisiana  Statehood in 1812.  Anglo  American planters began to purchase the Mississippi river and Bayou Lafourche front age property from the small farmers.  The Acadian /Canary islanders  being  “les petits habitants  ( French  for small Farmer) were displaced by the growing Mississippi River plantation system.  The English speakers wanted the lands they had  cleared, the ‘ Brulies’ for larger plantations.  New American planters immigrating to the area had the cash to buy the land from the poor farmers. There was not much resistance as both groups disliked the English speaking Americans, they did not trust the new government . In addition  they struggled to maintain levees which were required by law, they hated debt and  thus sold their land to get out of it.
Pitot, James (Pacques-François), Spanish cabildo ward commissioner of New Orleans; 1802 -1804. wrote a critique of Spanish rule of Louisiana colony for the French, Pitot
wrote… With the growth of Assumption Parish, the "les petit habitants withdrew into the further reaches of the swamps 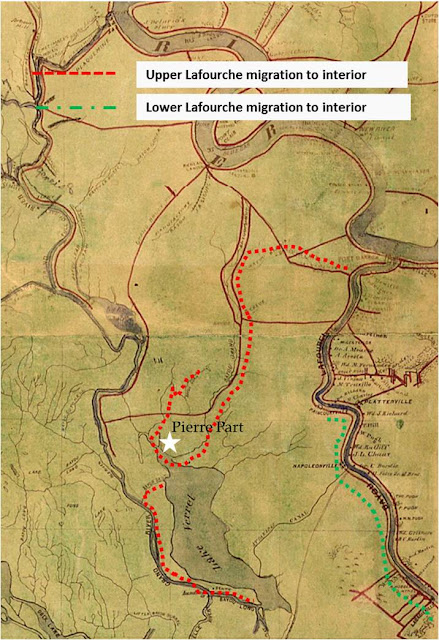 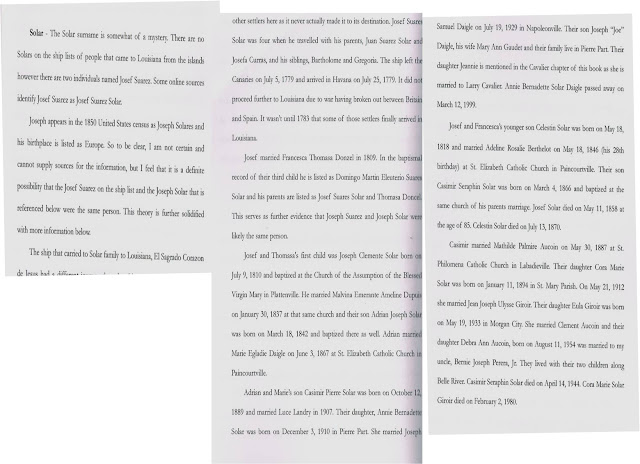 The  excerpt  above list Adrian Solar and  his spouse Marie Daigle begetting a  son,  Casmir Solar,  who was my spouses  Grandfather,  That she never knew, he died before she was born..


The 1860 census of Assumption Parish listed the Solar and Perera families, in the area of Brule St. Vincent, Ward 9, p. 87

The 1910 US census list both Adrian  Solar  and his  son, Casmire living at Lake Verrett. 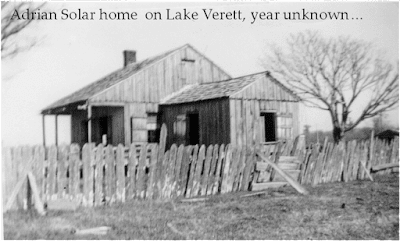 Casmire  moved his family from Lake Verrett to heart of the  Atchafalaya  Basin, in 1929 or 1930.  The great depression  had increased competition  for fertile fishing grounds close to Pierre Part.  Casmire  went to the center of the basin, Catfish Bayou at Grand Lake chasing better Fishing grounds.  He stayed there for 3 years, living in  a shanty on the bayou bank.  They left after the death of one of Casmire's  3 sons. They packed up and moved to the hamlet ‘Indigo Bayou’ at Bayou Pigeon, LA. His  occupation at Bayou Pigeon was  fisherman / moss picker. He lived the rest of his life on Indigo Bayou.  His family still lives  at Bayou Pigeon. 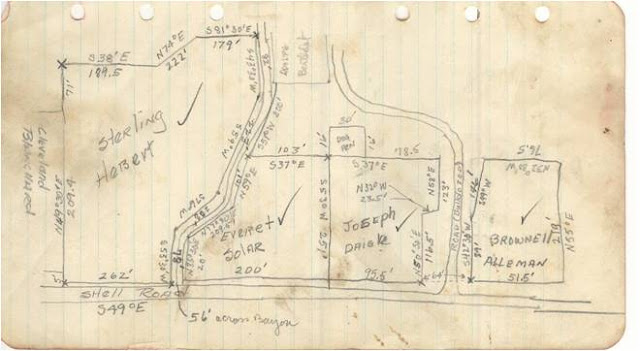 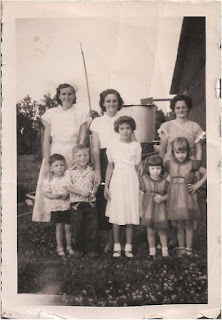 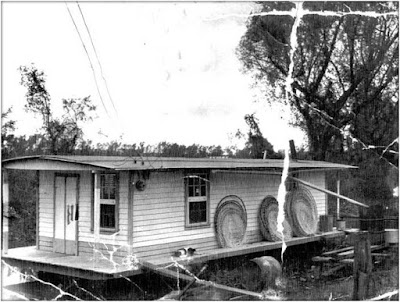 The Perera   family history  is unique, all Perera’s  can be traced back to single family . In this case Andres Pereas  and his wife Maria Catrina del rosario Perez, from Tenerife, Canary Islands and arrived in New Orleans January  1779. They were  settled at Valenzuela.

Huey Perera,  lived the first part of his life with one foot on a boat and one foot in the water.  His early life was on a camp boat  in the Little Bayou Pigeon/Keel Boat pass  area of Grand Lake with his father, Aldoras Perera  and brothers & sisters.  His mother died when he was 5 years old in 1943.


Aldoras Perera  made a living  by hook and line fishing from their camp boat in the swamp. To keep  the big Cat’s from twisting themselves off a trot line, requires  a metal swivel  from  the staging to the main line… Back in the day, when fishermen were to poor  to buy factory made  swivels, they had to improvise and  adapt, Huey’s family did just and made their own trot line  swivels. They had to make their own  special tool to make them.


It was in the early 1950’s  that Huey and his father and brother and  abandoned the swamp  moved  their Camp boat  permanently to Bayou Pigeon, one  of the last families to abandon to of the Swamp. Huey married  Annie Michel and he has raised his family at Bayou Pigeon, where is still a a resident  and is known as D.I.Y  expert.


In Chapter 16 of the Bayou  Pigeon book, page 358 we have a  chapter on Commercial fishing and we discuss Hook and Line (trot line) fishing.   Where as we describe  that in the 1930’s and  40’s  most of  commercial fishermen at Bayou Pigeon  started as a hook and line fisherman  and then most  moved up to Hoop Net fishing.

Big catfish  are known  for twisting themselves off  a trot line staging.  Thus  to put more fish in the boat, required the use of a swivel. on your trot line.  Most fishermen of the 1930’s and 40’s did not have the money nor could they find a manufactured swivel. 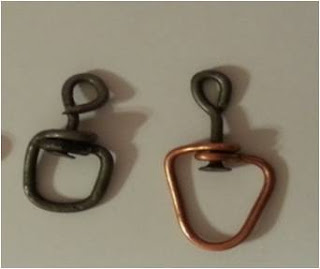 Atchafalaya swamper's they adapt, improvise as needed, the fishermen adapted and made their own swivels
﻿ 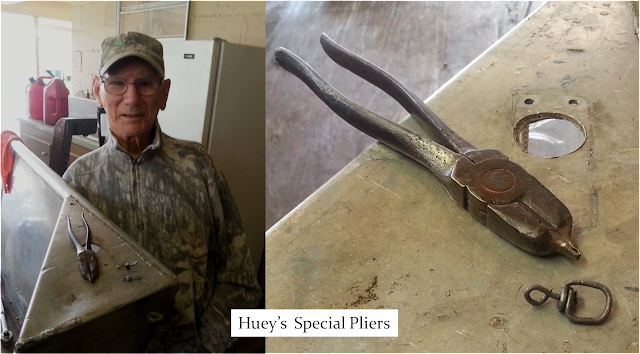 To make that swivel by requires a special pliers.  Huey and his father modified  electrician pliers to form hold  and form wire and nail.
Huey please place those special pliers in the  Atchafalaya  Museum in Plaquemine. 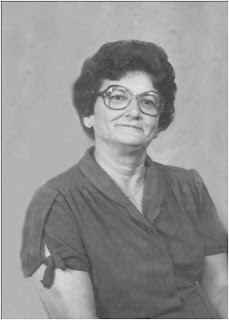 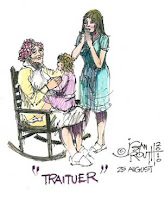 Ms. Pauline would place her hands the person she was treating  and say a special prayer that was on to her by previous  generations.


Ms.  Pauline  was a Traituese who treated  for several  different ailments  at Bayou Pigeon.  A common one  was earaches in children. She Hails  from Pierre Part and married  Alden Hebert of  Bayou Pigeon.


The Rivere family name  traces back to Bernado Antonio Rivero and his  wife Maria Antonio De Ort  who arrived on board the ship La Santa Faz. Bernado died  in 1803 and is buried in Platteville, La.


By second  or third generation, the common  spelling the of family name was changed from Rivero to Rivere. 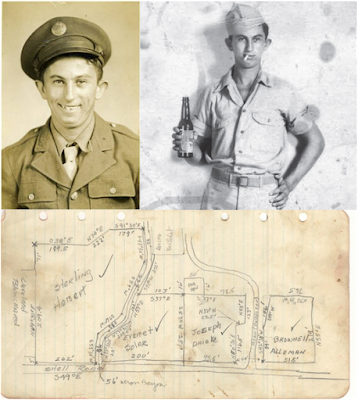 Mr. Brownell Alleman,  born in Pierre Part, and raised in Bayou Pigeon. He married Gursie Berthelot of Bayou Pigeon, LA. and lived at Indigo Bayou  next to  Solars , Daigle's.

He  was Veteran,  and  sometimes a Deputy Sheriff in a pinch, ( ie., he was a big strong guy) Deputy  Sheriff Adoph Berthelot deputized him as needed to help contain / deal with bar room fights…aka Indigo Inn Era…


The Alleman family name  traces back to two familial lines, Francisco Alleman  and a Juan  Antonio  Alleman… of Pierre Part…both Alleman’s  had  large families  and many descendants  in Pierre Part.

I know my wife's family really had no idea of the extent of their Spanish Heritage. I had always wondered, Solar is not a French Sounding name and  why they were the only Solar's at Bayou Pigeon?  Now we  know the rest of the story!

Bayou Pigeon it turns out is more diverse than we thought.  Acadians , Isleños, Americans and blended into Cajuns !

Posted by Chachie of the Atchafalaya at 8:42 PM