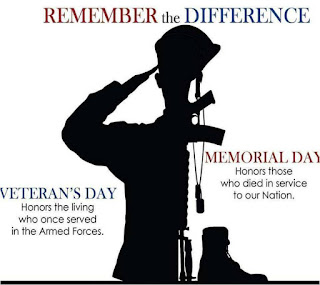 Yes, it’s a 3-day weekend but let’s not forget why.

On Memorial Day we remember and honor those who lost their lives defending and fighting for the freedoms that we enjoy today. A Gallup Poll in 2000 revealed that only 28 percent of Americans knew the true meaning of Memorial Day, and 40 percent confused it with Veterans Day.

Memorial Day is the day to remember those men and women who died while serving in our nation’s armed forces, whereas Veterans Day is a day to celebrate the service of all U.S. military veterans.

For me, this holiday, is  about knowing your community history / heritage.  I believe this Blog post  will make  you feel good.

With honor and gratitude we remember our Bayou Pigeon American  Heroes, our Cajun  Heroes. Because freedom in America,  isn't really free; There is a price to pay to keep this liberty.

Two Brothers and a first cousin,  who, served in the U.S. Army  (WWII & Korea). Two first  cousins in the same big battle, within 25 miles of each other, they died two days apart...and now over 70 years later with only two  sons and a handful of their relatives left on this earth to remember them.

Bayou Pigeon has a solemn obligation to remember all her sons lost in war. 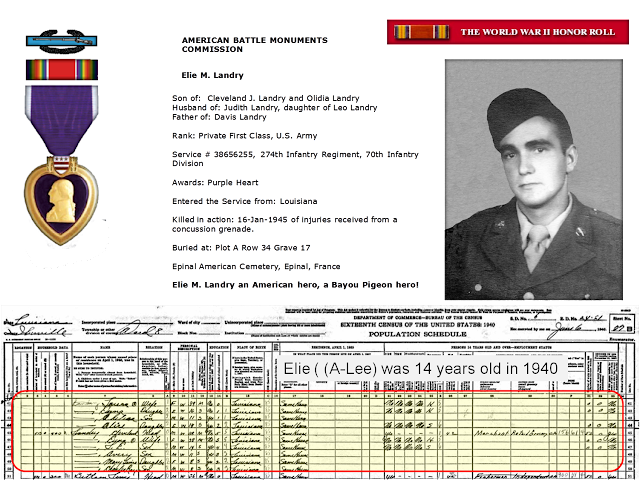 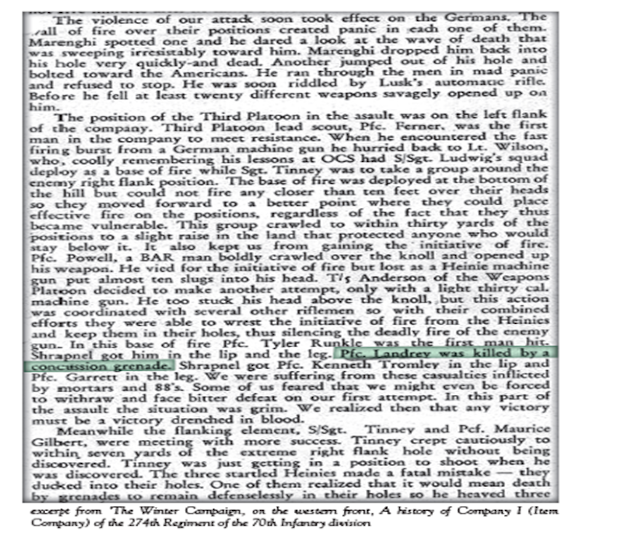 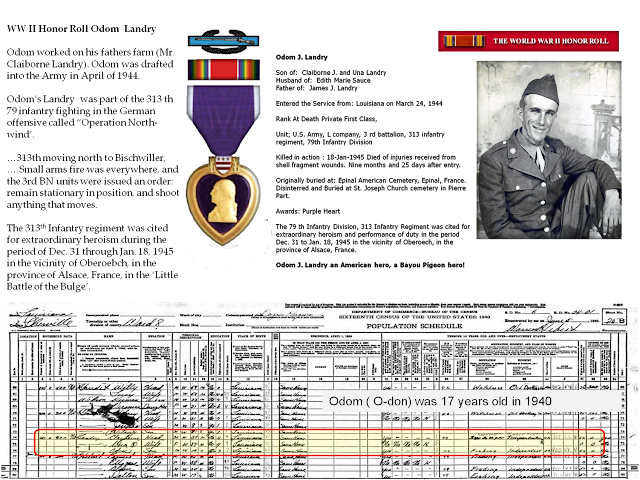 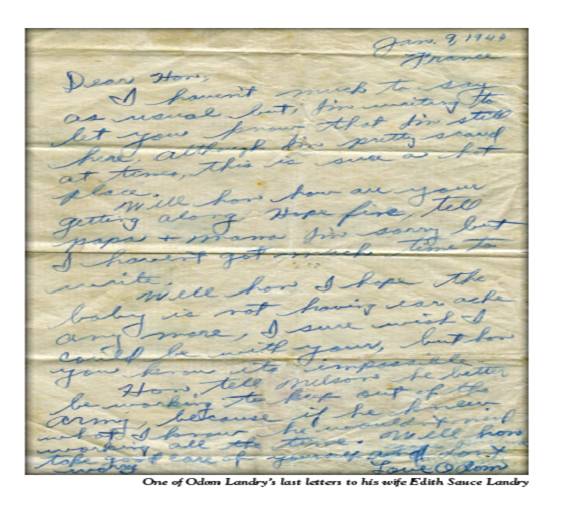 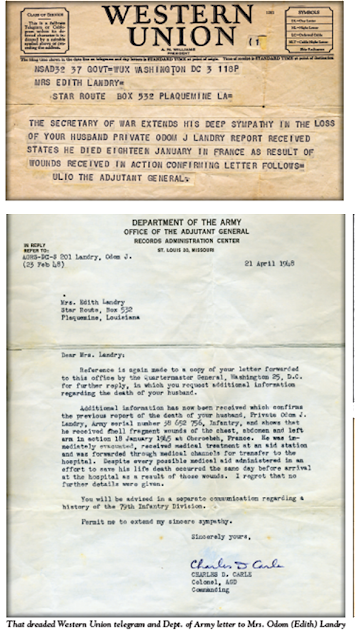 Mr. Felix Berthelot,  who passed  away May 18, 2018, a WWII veteran himself.
Recounted  to me he knew Elie (A –Lee) and Odom very well.  Mr. Felix said he and A-Lee were friends. They were typical Bayou Pigeon kids. French was their primary speech when they grew up. He said they would play with ‘plank board’ boats. That is a 1 x 8 or 1 x 12 flat board with a nail attaching a string about 8 ft. long to it and tying the other end to a willow pole about 6-8 ft. long where you could slide it across the water mimicking a fast moving  bateau. They would play with those for hours in Houseboat alley (borrow canal) from Mr. B Landry’s store. See the Pigeon book picture on page 229 of the dock.

Once when they playing with the boats, next to the dock, A-lee stepped on a poly-wog (mud cat) and it finned him and he hollered and hollered. Felix said A Lee's mother put some Vicks salve on it. Vick salve was used as cure all form infection in those days . Mr. Felix said he and A-lee would go Pierre Part via Putt boat to purchase / pick up supplies for the store. They would go via Grand River to Bayou Gros Bec and Dock at the Pierre Part church. Where they would load the supplies and make the trip back to Pigeon. Sometimes they would have to wait on the supplies to arrive. Sometimes the wait was hours, they often walked from the church down the Pierre Part road toward Belle River to A-Lee’s grandfather’s house ( Doo Doo Landry, see page 527 in the book ) to pick persimmons. A-Lee would climb the trees and shake the tree limbs and Felix would pick the persimmons. This was long walk, Doodoo’s house was past today’s Duffy’s Bait Shop on Hwy 70.


Odom, was older than Mr. Felix, thus his interaction with Odom was less. His most vivid recollection of Odom (O-don) was that he had a drivers license. At the time right before the war, Adolph Berthelot drove the school bus from Pigeon to Crescent school. Sometimes he would get Odom to drive his car and meet him. So he could use his car to go to Plaquemine. As Odom was dating his future wife, Edith Sauce. Odom would want to bring Edith along for the ride, but he had to find a chaperon to go with them, in the old days a woman could not  ride alone with a male. Mr. Felix once accompanied O–don to do this.

After the war , Mr, Felix said people just did not talk about the war much. It was painful losing son’s and soon it was just like A-Lee and Odom had just gone missing… no one really brought conversation about them.

The third son of Bayou Pigeon, lost in an almost  forgotten war. 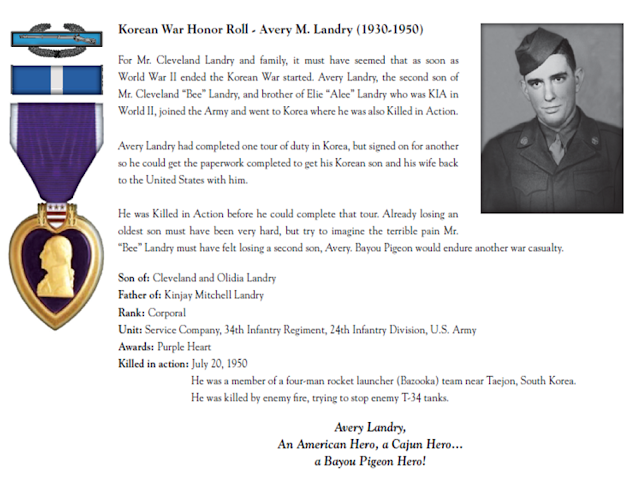 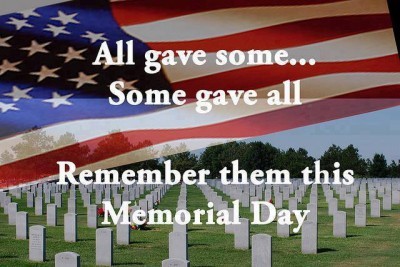 So, what can we do to carry on the meaning of this sacred day in our community and properly honor our fallen heroes?

Display an American flag and lower it to half-mast until noon in honor of our sons who gave their lives in service to our nation.

Reach out to Davis  Landry, Jimmy Landry, sons of Elie and Odom and Phyllis Landry Toups, sister of  Elie and Avery or any of there cousins, where  you might mention you read this post... we honor them properly in the Bayou Pigeon  Heritage  Hall, check it out the next time  you are there.

There are many generation gaps between residents, native sons / daughters  and residents of Bayou Pigeon. We  can come together to remember our heroes on this  solemn remembrance... Know &  celebrate  the Heritage...

Posted by Chachie of the Atchafalaya at 9:26 PM